The Common Core State (ha!) Standards have seen better days. By now, actually, they really ought to be dead-- stabbed in the back by their former politician BFFs, torn up by a constant barrage of criticism, knocked about the sconce by angry parents, repeatedly done in by their own deep flaws, and just generally bearing a whole lot of slings and arrows (plus, of course, all the problems that happened to them because of bad implementation).

Now they just shamble around the education landscape, broken and twisted and barely able to stumble in any direction, but absolutely unwilling to lie down and die. The Core is now a zombie, a walking dead policy. And the signs are everywhere. 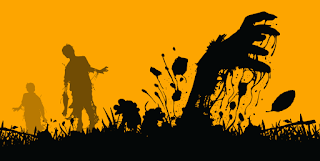 We still get a steady trickle of teacher-written pieces about How The Core Made My Classroom Awesome! Here's an interview from Louisiana with two teachers who love the Core very much. Rhea-Claire Richard and Bailey Debardelen teach fourth grade in the Lafayette Parish, where the whole staff is "past the point of opposition" and "All of our teachers love Common Core." The two do admit that at first teachers were resistant, but they blame that on teachers' fears that students and teachers would not be able to live up to rigorous standards and not, say, a concern that the standards were amateur hour junk.

Have we found at last a colony where the Core roams whole and happy? Not likely-- look at this explanation of how Lafayette handles the ELA standards.

I see rich discussion in my classroom. I see deep thinking about what they’re reading or concepts that they’re learning, and I see that they are able to form their own validated opinions based off of what they read. They can articulate their thinking using evidence, and I’ll give you an example. One of our old GLEs used to be “identify a main character in a story.” That’s a very low-level thinking standard to just identify something, whereas now, I may ask my students, “How do the actions of the main character affect the plot of the story?” Well, they’re going so much deeper. They’re having to look at the author’s craft, how the author wrote what they did and why they chose the words they used.

The two are being interviewed to argue against Louisiana's threatened jettisoning of the Zombie Core, and Debardelen has this to say:

I think that within our school and within the four walls of my classroom and Rhea-Claire’s classroom, there are aspects of the Common Core that I don’t feel like I will ever stray away from.

In other words, these two (who are relative newbs) will do what all professional educators do-- they follow their own best judgment and ignore whatever paperwork instructions they've been handed. They didn't need the core to think of good ways to teach, and they won't lose those ideas if the core goes away.

This is what we're seeing again and again and again. Teachers have "adapted to" and "adjusted to" and "become numb to" the zombie core by simply using their own best professional judgment and disregarding everything about the core they don't like (and are allowed to ignore). Experienced teachers know how this works. The easiest way to "align instruction" to a set of standards is to do what you were going to do anyway and check off whatever alignment paperwork your district has given you to play with. And for every local teacher, the only version of the core that you really need to understand and acknowledge is the version that your district adheres to, which is probably the original core with a few fingers and toes chopped off.

While that process is knocking some of the flesh off the zombie core, states help out by chiseling off the common core brand name, or by rewriting portions of the standards into some other messy version. In some part of the zombie core's remaining brain matter, it thinks fondly of the days when states had to promise not to change a word of the standards and add no more than 15% of new material. That very quickly became, "Do whatever you want. Nobody will stop you."

And testing has chewed several organs out of the zombie core's guts. Core fans can talk all day about how the core promote critical thinking; they may be full of it, but there's no point having that argument because the Big Standardized Tests don't have the faintest breath of critical thinking anywhere on them, and if it's not on the test, it doesn't matter. Every part of the zombie core that isn't on the test has been reamed out and discarded.

What are we left with? A shambling tattered husk that some still call common core, but has long since its identity and only vaguely resembles its original ugly self. Folks like the Lafayette teachers or the many groups still trying to make a buck from the core can all praise the core, but they are talking about a memory, a phantom, a tottering doddering hollowed-out hulk that nobody really, truly embraces. Zombie core can still cause some damage and hurt people, but mostly it stumbles along in slow steady decay, looking less and less like its early self and more and more like a slow monster searching for brraaaaaaainnnss. Maybe there will be a final kill shot, or maybe it will just keep wasting away into nothingness. Either way, the zombie core is on its last brittle fleshless legs.
Posted by Peter Greene at Thursday, March 17, 2016