"If we go to court over it, so be it,” he said, “because at the end of the day we’re standing up for what’s right and for what God has said is right and true.”
That's David Valesky of the Penncrest school board, responding to the board's passage of new restrictive rules on what sorts of books can be placed in the school library.
The rules change has been brewing for almost two years, starting in May of 2021 when the library set up a display of LGBTQ+ books and Valesky posted:
Besides the point of being totally evil, this is not what we need to be teaching kids. They aren't at school to be brainwashed into thinking homosexuality is okay. Its [sic] actually being promoted to the point where it's even 'cool'.

Valesky later told the local newspaper that "he was against the school 'pushing' such topics onto the students," and that schools shouldn't have anything to do with "kids determining their sex or who they should be interested in." 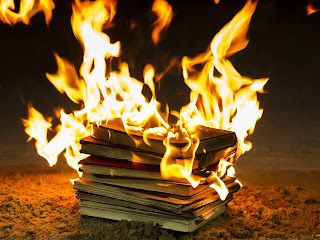 Valesky's concerns continued. Back in May 2022, Valesky held up the purchase of books for the library. In particular he singled out the books "Global Citizenship: Engage in Politics of a Changing World" and "Nevertheless We Persisted: 48 Voices of Defiance, Strength, and Courage" as promoting Black Lives Matter. Other books on the list pertaining to racism that Valesky did not approve of include "Finding Junie Kim," "Genesis Begins Again," "Apple Skin to the Core," "Downstairs Girl" and "Fat Chance."
Valesky explained at the board meeting, as reported by the Meadville Tribune:
"I don't have an issue if we're giving books that's targeting education of the Civil War and slavery and there is racism even today, but this is obviously like shoving it down every corner," he said.

Valesky said there were four books on the list that "openly promote the hate group Black Lives Matter."

"That's a group that is for destroying," he said. "They aren't protecting Black lives."

Valesky said the resource list needed to be "well-founded" and said the current version was "definitely far from it."

So in July, the board adopted new policies about library materials, but within a few months (including the month with elections in it), Valesky was back calling for tighter restrictions on what people can read.
Valesky has been the point man on this moral panic, but he's certainly not alone. Folks have been vocal in support of the restrictions at board meetings, and in the comments for my previous post about this (and that's not including the comments I didn't put up--pro tip: if you want to accuse people of an actual crime, the take your evidence to the police, and if you don't have any, then just shut up). And supporters were there at the January 12 voting meeting (you can watch it here-- don't miss the student who opens with "Hi, I’m Ezra. And I’m a radical left wing activist.”).
These are clearly people who believe they are doing God's Work by stamping out evil books that promote evil things, though they see an awful lot of evil in an awful lot of things. To listen to the discussion you would think that the school wanted to place hard core porn films in the library and not, say, mass market novels like Water for Elephants and Looking for Alaska.
And there is the usual disconnect. A student in the previous comments notes that with cuts and schedules, most students have no access to the library, anyway. Meanwhile, research tells us that students are turning to the internet--even in school--to look at actual porn.
One board member noted that there was no worries about unintended consequences because the policy only forbids "explicit" stuff, so her beloved Les Miserables will be safe. I wish her luck. Since supporters claim that those opposing the policy were defending "pornography being read by minors," my sense is that the folks on this reading rampage are not interested in making very fine distinctions. Especially when it comes to LGBTQ+ depiction, where they have been clear that any depiction at all is evil and not to be tolerated.
The broadest term in the rules is "sexualized content," which can mean almost anything. Valesky and his supporters have been pretty clear about what they think it means. For Penncrest students, it means they're about to learn some lessons about censorship in the US.
Posted by Peter Greene at Saturday, January 14, 2023
Email ThisBlogThis!Share to TwitterShare to FacebookShare to Pinterest