Can AI Get A Date

Filteroff is a video speed-dating site that apparently lets you text for starters and then ramp up your activity with video. But the site apparently did something else intriguing.
The owners of the site noted a too-large number of the kinds of scammers that like to use dating sites to get themselves matched up with other people's money. And they decided to take a different approach:
When a user signs up for Filteroff, our sophisticated Scammer Detection System 🤖 kicks into full gear, doing complex boop-bop-beep math to determine if they are gonna be a problem.

When a scammer is detected, we snag them out of the Normal Dating Pool and place them in a separate Dark Dating Pool full of other scammers and… BOTS! Oh heck yeah. We built a bot army full of profiles with fake photos and some artificial intelligence that lets our bots talk like humans with the scammers.
What better field test for a language synthesizing algorithm? But this company's results are sporadically amusing. 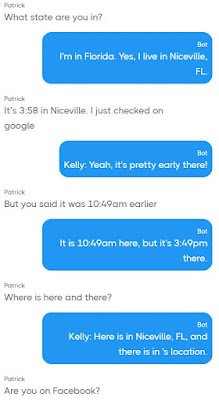 They have a plethora of these, including many that they've acted out on video. It is striking how hard scammers are willing to keep plugging away in the face of nonsense. It's also striking how close-but-no-cigar the bot responses are.
This was last year, pre-ChatGPT, but since ChatGPT became the hot new thing, at least one writer has let the chatbot enter the dating pool. Jordan Parker Erb let ChatGPT handle her Hinge responses, and, well, as she put it, "ChatGPT is not a smooth talker." Some of her highlighted responses:
As a funny reply to a person who shared their most irrational fear was flying: "No problem, I'm more than happy to hold your hand and provide moral support during turbulence. And if the plane goes down, at least we'll go out together in a romantic blaze of glory!"
As a short witty response to someone who works in finance: "Hey there finance person! I see you're good with numbers. Can you help me with my budget? I'm trying to save up for a lifetime supply of avocado toast and craft beer. Is that a good investment?"
Erb reports that ChatGPT was really fixated on avocado toast and beer.
Maybe this falls outside the range of what chatbots are intended to handle, but it's more data points to respond to the question of how well the algorithm can do responding to carbon based life forms in the wild.
Posted by Peter Greene at Thursday, January 12, 2023
Email ThisBlogThis!Share to TwitterShare to FacebookShare to Pinterest