FL: Can We Stop Pretending This Is About Choice?

Can we stop pretending that Ron DeSantis and his allies have any interest in choice when it comes to education?
The hits just keep on coming. This week DeSantis packed the board of Sarasota's New College with some far right folks. The headline appointment was Christopher Rufo, the right wing activist who brought us critical race theory panic and who has suggested that we can get to universal choice by sowing universal distrust of the public school system. 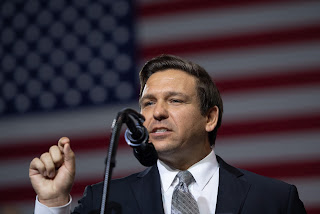 But choice is not the point, and for a certain sector, it has never been the point. Ron DeSantis has just become the most obvious example. Taking the liberal and successful New College and targeting it to become the "Hillsdale of the South" is not about creating more choices, and nobody is even pretending that it is. It's about silencing one set of voices and amplifying another set.
This is not a new trend. The Don't Say Gay law and the Stop WOKE Act are two perfect examples of actions intended to stop one particular set of values and expression and replace them with others. At no point has DeSantis expressed the notion that Florida should have room for people to choose between "woke" and "unwoke" views in education; instead he has been quite clear that "woke" ideas must be stamped out. He's not arguing for a wide variety of choices; he is arguing that his preferred choices should be the only choices.
He pushes the end of tenure for Florida public university faculty, arguing that they develop an "intellectual orthodoxy" is left unchecked, by which he means they get attached to ideas other than the orthodoxy that he supports. DeSantis promised to crack down on "woke" ideology, then called for an audit of money spent on diversity, equity and inclusion programs at colleges.
None of this is about choice. None of it. School choice advocates who hold Florida and DeSantis up as examples of forward-thinking awesome school choice advances are being disingenuous--Florida is on a road to impose a more ideologically focused authoritarian model of education in which only ideas approved by the governor may be included in schooling.
It's the two-pronged win-win of the culture warriors. Either they dismantle the offending institution and replace it with one of their own, or they take over the institution and install the leadership they prefer.
There are many levels of irony here, including the irony that a pluralistic school system run by locally elected officials provides far more choices than a system bent to a particular ideology. And many folks have pointed out the disconnect between conservative support for choice in some areas (education) but not in others (reproductive health). But there really is no disconnect, just differing definitions of choice, and a belief that any system of choice should only include the correct choices. Which for the strictest of ideologies (or opportunists playing to the ideologue crowd) is a very narrow set of choices.
It's not about choice or freedom. It's about restricting the rights and expressions of people you disagree with and expanding the rights and expressions of the people you agree with. The more DeSantis advances his agenda, the clearer it becomes that it has never been about choice at all.
Posted by Peter Greene at Saturday, January 07, 2023
Email ThisBlogThis!Share to TwitterShare to FacebookShare to Pinterest