New Hampshire's GOP has had a long, rough road to get to the Land of School Vouchers.
Education Savings Accounts, a kind of super-voucher, have been pushed in New Hampshire for several years, championed by Education Commissioner Frank Edelblut, a businessman/legislator who homeschooled his children and has long advocated for school choice. Edelblut bowed out of a gubernatorial race with Chris Sununu, and was subsequently appointed to the head education spot by Sununu, where he butted heads with the Democratic-led legislature over many attempts to disrupt, defund and dismantle public education. 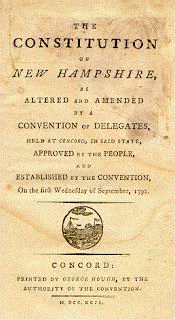 Back in 2017, voucher fans came close with SB-193, which proposed Education Savings Accounts (ESAs) for the state, handing parents money they could spend on a broad assortment of education-ish expenses. The bill’s prime sponsor, Sen. John Reagan, argued that the lack of accountability didn’t matter because he claimed that public schools “can’t explain where the money goes now, anyway.” Edelblut backed that one, too.
In 2020, the GOP flipped both the House and Senate. One of their first orders of business was a new voucher bill. They used the name “education freedom accounts,” an echo of Betsy DeVos’s ill-fated national voucher plan. The state would hand its share of a student’s education funding to a scholarship organization to give to families for a wide assortment of expenses, with loose limits on who could get the voucher, few limits on how it could be spent, and no oversight of the taxpayer dollars.

The hearing for this bill drew 3,800 people to speak, only 600 of whom were in favor. Opponents warned that the cost of the program would be far higher than the $130,000 advertised. Rather than buck the wave of public opinion against the bill, the legislature turned it into a last-minute addition to the state budget.

The vouchers are funded by the state’s Education Trust Fund. That fund was established in 1999 as a result of Claremont School District v. Governor of New Hampshire, a case that resulted in an agreement that the state would kick in a larger share of school funding. (Claremont is also the city where I lived and attended school up through third grade. It's a nice little place.)
And those warnings about a lowball estimate for the cost of the vouchers? Yeah, they were only off by about 18,400%-- the current price tag is $24 million. There are two contributing factors. One was the Koch-backed Americans for Prosperity canvassed door to door to make sure that everyone was aware that there was free money on the table, which may be why (factor #2) the vast majority of families taking voucher money have students who have never set foot in public schools in the first place.
However, New Hampshire's voucher plan has one big achilles heel--the law.
Remember the Education Trust Fund from which that $24 million in taxpayer money has been taken? There are rules about that money, and they include a rule that says the funds
shall not be used for any purpose other than to distribute adequate education grants to municipalities' school districts and to approved charter schools...
Not vouchers. Not  debit card payouts to families for whatever education-adjacent expenses they choose.
And so, it is lawsuit time. Besides the misappropriation of funds in direct contradiction of the pretty clear law point, the lawsuit also raises another issue--one that applies even in states that don't have this peculiar funding system.
The voucher system is administered the Children’s Scholarship Fund New Hampshire. They have the responsibility to determine which families are eligible for the program, disburse the funds, and determine which vendors may be on the receiving end of the voucher money. This company--which is not a government entity-- takes over the functions we would expect from a state department of education, which is the other critical point of the suit.

This diversion of public education funding is central to the State’s goal for the program: removing students from public school systems by using the EFA as a substitute for the State’s duty to provide an education.

Further, the suit alleges, “the EFA program delegates virtually all authority to CSF with no meaningful oversight.” In fact, as is the case with many such voucher laws, it expressly forbids the state to “impose any additional regulation of education service providers.”
So even though New Hampshire has established one of the most expensive voucher systems in the country, with virtually no accountability or oversight, the system is still facing pushback.  So what is a voucher-loving legislator to do?
How about proposing a constitutional amendment? Here's Constitutional Amendment 7, which is a simple bill-- it just removes one sentence from the part of the constitution that says that money raised by the state for education may not be spent on "the schools of any religious sect or denomination." Yes, New Hampshire taxpayers could have the super-duper opportunity to pay taxes to support religious schools that reject those taxpayers own children for not being the right sort. Seems awesome.
And not that anyone is saying that the lawsuit looks like winner because the law so clearly forbids the spending of Education Trust Fund money on vouchers, but here's HB 440, that just rewrites the Education Trust Fund rules so that it's okay to use the funds to fund the voucher system. The bill actually expands the original rules quite a bit. ETF funds could also be spent on a variety of things, including charter school lease costs and "phase out" grants for school districts. And if it seems like this might get even more expensive, the bill also allows general fund monies to be shunted into the ETF, which is handy way to hide from taxpayers that they are setting up an entire parallel school system, which represents an entire new financial commitment from the state.
There are some other bills waiting to be heard in Concord, including one that would allow local communities to establish their own voucher system. And, of course, there's a bill to broaden the already-broad eligibility requirements for the voucher system, leaving the taxpayers on the hook for even more extra education funding (but still without oversight or accountability).
My grandmother, who was a New Hampshire state legislator for much of her adult life, started her political career on the school board, and she would have some choice words for this continuing effort to disrupt, defund, and dismantle public education in the Granite State. It's destructive and, more than that, dishonest-- but then, I suppose neither "We want to raise taxes so that we can send more tax dollars to private schools" nor "We'd like to just defund public education and leave you parents to fend for yourselves, but we'll give you a couple grand to shut up about it" would play that well.
Here's hoping taxpayers in New Hampshire are paying attention. Not that the legislators don't know how to just ignore the public and press on, but there have to be elections eventually and all of these shenanigans would be worth remembering.
Posted by Peter Greene at Wednesday, January 18, 2023
Email ThisBlogThis!Share to TwitterShare to FacebookShare to Pinterest