PA: How Much Does Your District Pay in Charter Costs

An extremely handy spread sheet has been circulating lately, and if nothing else, I want to put a link here so that I can more easily find it. If you're in Pennsylvania, you'll want to look at this, too.

The document covers every school year from 2009-2010 through 2014-2015 for every single one of our 502 pubic school districts (yes, that is a high number, but that's another conversation).  It shows how much money left the district to go to charters, broken down by nonspecial education students and special education students (the pay rate is different). I recommend that you browse on your own, but let me hit just a couple of points.

First of all, a bunch of my civilian friends looked at this and said, "How can our district be paying that much in charter costs when we don't have any charter schools here?" The answer is that all Pennsylvania students have access to cyber-charters. Not everybody gets that a cyber school is just another kind of charter-- a highly profitable one in Pennsylvania, where the pay rate for the charter has noting to do with the actual charter costs. Put another way, your district pays the same to send a child to a bricks-and-mortar charter with a real building and heat and light and live teachers in classrooms as it spends to send a child to a cyber school with a computer, an internet hookup, and remote teachers who handle hundreds of students at once.

Where you find districts in financial trouble, you find huge charter payments. This is a sort of chicken-egg death spiral. A district is financially strapped, so charters move in and students move out, taking a bunch of money with them, so that the district is even more strapped and has to cut more services and programs, which makes more students want to leave, which creates more financial strain. I know this contradicts the fairy tale that districts facing charter competition would pull up their bootstraps and get better better better, but it turns out that even bootstraps cost money.

So there's Erie City Schools, a school district so strapped that they seriously considered closing all their high schools, forking over $20 million to charters. Allentown is losing $26 million. And York School District, threatened with complete takeover, lost $22 million. And nobody beats Philadelphia, where the school district handed over $715 million dollars to charter operators.

Meanwhile, well-heeled districts like Mount Lebanon were only losing $381,424.77 to charter operators.

There's a lot of useful local data to be dug out of this spreadsheet built out of PA Department of Education data. Use it to enliven the conversation with people who don't understand the fuss about charters, or those other people who are certain that the local district is in financial trouble because the money's being wasted by administration.

And if you're wondering what keeps all this money flowing, check out this piece about charter lobbying at EdWeek, noting specifically this chart. Hooray, Pennsylvania! We're number one!!: 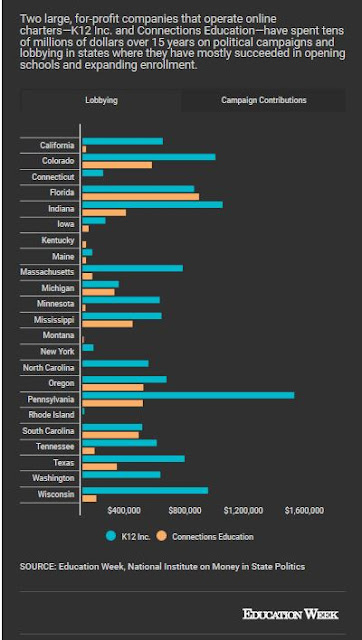