DeVos: No Real Role for Feds

At Axios (the new "media company" from two former Politico honchos), Johnathan Swan (formerly of The Hill) has a quick moment with Education Secretary Betsy DeVos. She uses the opportunity for a bit of a do-over on her confirmation hearing, but it's her thoughts on the federal role in education that are most striking.

* She would have come up with a better illustration than a grizzly bear. "It was a valid illustration<' she says. But it probably "wasn't the best illustration I could have given."

* Everybody should have to follow the Individuals with Disabilities Education Act. Totally. She has "so much compassion for families that have to avail themselves of that law."

* She's apparently okay with her none-answers on equal accountability for all schools that receive federal funding, because that's a concept "with which she'll never agree." 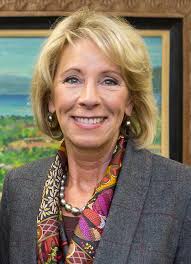 Some other nuggets from the interview include her surprise at getting the call (actually an e-mail from someone with whom she's "worked for a number of years."-- my money is still on Mike Pence). Trump got her excited about the job. She'll consider the department successful if they can get ESSA successfully implemented. She looks to "slim down the department."

What changes does she expect in her tenure? No surprise here-- more charter schools, more private schools, more virtual schools, more schools of "any kind that haven't been invented yet." Left unsaid but clearly implied-- fewer public schools.

In her ideal world, the federal government has any a role in education?

The answer gets even bigger bolder print, because somebody understands that it's key:

The elaboration is where it gets interesting-- She sees that the feds have had a useful role at certain "important inflection points" in the past, like "when we had segregated schools and when we had a time when, you know, girls weren't allowed to have the same kind of sports teams."  But then the question-- "are there any remaining issues like that where the federal government should intervene?"

So there you have it. Racial and gender bias are completely under control, totally solved, no longer need any sort of federal oversight. There are no states or districts that are trying to maintain any sort of systemic inequity. Nothing to see here. Go home.

In another interview published yesterday at Townhall, she does allow for a slightly more expansive view of federal responsibility. Sort of.

I do think there are some federal roles around ensuring children with special needs and then the anti-discrimination issues at the level they were originally intended. Those are areas in which I think there is a federal role, but I also think there is an opportunity to streamline and simplify a lot of the engagement and involvement the department has had around some of these issues, issues that have continued to mushroom and grow well beyond the core focus of those two important functions and protections.

This is, of course, in keeping with the philosophy that says we no longer need to enforce the Voting Rights Act because all racism has been removed from the management of elections. We don't need affirmative action because that's all fixed, too. I suppose that we can be grateful that DeVos did not suggest there's a federal role for the department in protecting the white boys who are America's new most-oppressed minority.

It is hard to know if she is being disingenuous or off in the billionaire's bubble, all issues of race and gender seem fixed. Either way, this is a clear signal to states that want to pursue policies that allow them to (continue to) underfund schools for Those People will not get any interference from the feds.

Go read the whole piece. Much of it is not news-- we knew DeVos was intent on replacing public school with privatized education, and that she would be happy to see the department go away on her watch. The idea that there are no pressing issues requiring federal oversight  is a new expression of an old DeVosian idea-- there's no need for any sort of accountability in education, leas of all on the federal level. One more sign that things are going to get ugly and advocates of public education, equity, and civil rights had better get activated and organized on the state level.