For whatever reason, a video from your friends at Goldman Sachs has been circulating again. First floated out into the interether last June, it highlights "three ways technology will transform the classroom" (and therefor you should invest in this stuff and make a bunch of money). 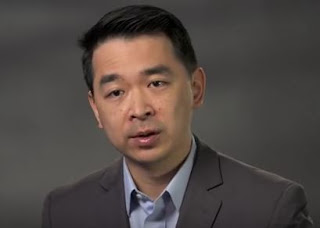 Our host is Victor Hu. With a JD from Harvard law and an MBA from the Wharton School, Hu is well set to spend over a decade at Goldman Sachs, much of it as "global head of Education Technology and Services Investment Banking, advising, financing and investing in education and knowledge services companies globally." So understand-- this two minute prospectus is not sub-textually "Boy, this is going to make education awesome' but "Boy, this is going to move a lot of merchandise and generate a ton of revenue for somebody."

So what are the three ways that technology will transform the classroom. Well, you may have heard some of this before...

Content will no longer have to be presented in a "monolithic or linear format," and also, students will no longer have to take notes with quill pens or come to school on horseback. Glad we now have the potential to solve all those problems. Now content can be "modulized" and presented to the learner on a computer screen at the right time at the right level of difficulty. Because magic.

We can use data to measure student competency as well as engagement, and teachers can figure out much earlier that students get bored doing stupid computerized worksheets-- oops! Sorry. I wandered off there. Actually, teachers will figure out a lot sooner when learners are struggling? Really? Do you already know how soon I can tell who's struggling? Because I can often tell that my learners are struggling roughly two seconds after we've started it. Do data analytics include some sort of time machine component?

Anyway, by using "early intervention" teachers will be able to deal with issues surrounding "student potential." Because teachers weren't already doing that.

This one is "exciting." We start with some stock footage of classrooms of earlier days while Hu explains that we've always had a factory model where students have to be in seats for a certain amount of time, and now we have the exciting prospect of replacing that with a factory model that requires students to check off a list of required tasks. Seriously-- there are a lot of things you can reasonably say about CBE, but "not a factory model" is not one of them. CBE reduces education to an assembly line of tasks to be performed by the students. CBE breaks down complex learning into a list of simple tricks to perform in the same way that McDonald's breaks being a gourmet chef into a list of simple tasks to be performed to create a Happy Meal.

Hu says that a competency based model means that people can take as long as they need to learn something, which he says means that nobody gets left behind, which is crazy talk because it means the exact opposite. If I'm driving to Cleveland in a car and you're following, but you decide you want to stop and watch the flowers grow and maybe ride a bicycle for part of the trip and take all the time you need, you will be left behind. I mean, I think the idea of moving at your own speed and arriving in your time is an admirable approach, but it absolutely means that you will be left behind by people who take less time to accomplish the same goals.

Now that we have technology, people can be life long learners. You may remember the touching stories of Ben Franklin and Thomas Jefferson, who often sat in Independence Hall, dejected and downhearted. "Dammit, Tom," Franklin would say. "If only we had computers, I wouldn't have had to stop learning things when I was sixteen. Someday, someone will invent technology that will let people keep learning long after the graduate from high school. But until then, we're all stuck. Want to go pick up some hot colonial babes?"

This is the kind of baloney that is used to sell investments to people with money, and if it makes little educational sense, that's because the real audience is Amateurs With Money. That remains one of the scourges of the modern reformster movement, all the way back to David Coleman, education amateur, pitching Common Core to Bill Gates, an incredibly wealthy education amateur-- people who want to sell a product not to the actual users of that product, but to the investors.

This is where Goldman Sachs thinks the big money is coming, and that paradoxically attracts big money, which is why these three not very impressive ideas continue to be a threat to the promise of public education.