Barber: Let It All Burn


On Valentine's Day, Sir Michael Barber (the head education honcho at Pearson) took to the74 to offer a rather odd and ultimately confused metaphor for education reform by walking us through the story of St. Paul's Cathedral. It's the test from his speech at the 2016 Global Google Education Symposium. Yikes.

The problem, he asserts, began with the construction of the original St. Paul's, a classic Gothic construction whose spire had been shattered by a lightning strike in the 1560s, a mess that was never repaired. A century later, royal surveyors recommended patch and repair, but fortunately, just a few years later, the Great Fire of London leveled the city, St. Paul's included. Christopher Wren got to build a new cathedral.

Does this historic example of disaster-based opportunity remind you of Katrina-socked New Orleans? Well, it does Barber. And it represents for him a choice that he will repeat throughout the piece--- patch and mend, or transformation?

He proceeds with a litany of ills-- blacks men sent to prison, poor students not admitted to Oxford, Greece's huge levels of youth unemployment, illiterate Ugandan teachers, jobs at risk for automation.

Patch and mend, or transformation?

He's talking now about the education system. And he will now call out the reasons he think transformation isn't happening.

Cost-- it's easy to let short term concerns "override long-term aspirations." Kind of like poor people could save money over time by buying a Tesla with the $80,000 they don't have.

Entrenched status quovians-- Oh, those damn teachers' unions. They advocate for crazy things like smaller classes. Barber also accuses us of advocating for less accountability, which is simply a lie.

Barber then presents his chart of "false dichotomies" as part of the psychological barrier problem. 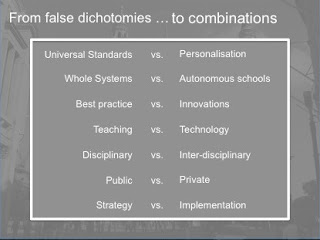 His point here is that we can actually have both/and of each of these.  Some of these are straw men-- has anybody ever said that we have to choose between best practices and innovation? Others are just glossing over some serious questions, like universal standards vs. personalization. And all of them skip over the question of the content of the ideas considered-- it's not a strategy vs. implementation issue if the strategy is junk to begin with and no implementation in the world will de-junkify it

Lack of imagination-- "We cannot build what we cannot imagine" is a facile observation, and not really applicable here. First, Wren's imagination was firmly rooted in a deep and thorough understanding of architecture and building. He did not imagine a cathedral floating on clouds, or with a roof unsupported by functional structure. Second, we're not talking about building a big stone structure; we're talking about an organization grounded in a complex web of human relationships. I can imagine that Angelina Jolie will fall madly in love with me the moment she sees me. I can imagine that I can staff a factory with a thousand obedient, compliant, happy meat widgets who will put loyalty to the corporation ahead of their own concerns. But imagination does not make it so.

But Barber believes that some systems and system leaders have made it happen, including Paul Pastorak and Paul Vallas in New Orleans, which is a bit of a stretch. Tony Blain and Lee Kuan Yew (Singapore) get nods as well. He allows as none is perfect, but all have "dramatically improved student outcomes within three to five years," a claim that is only true insofar as those "leaders" were able to swap out bad test taking students for meat widgets that did better on bubble tests.

Barber is attached to the romantic vision of the Hero CEO, the "courageous leader" who can transform an entire system, using the transformative elements of deliverology,a management consultant cathedral of bunk.

Barber wants to spend the rest of his life transforming the living daylights out of education, comparing that goal to Wren's forty-year work on the Cathedral. He wants to get transforming right away, and the big finish of his speech is a question-- 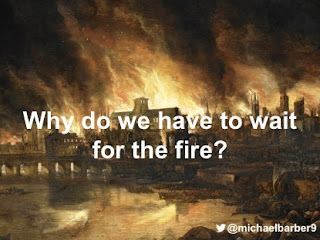 Why do we have to wait for the fire?

So, I guess, step one is to burn it all down now. Disaster capitalism should never have to wait for a disaster to present itself.

But here's the really curious thing about Barber's speech. I have saved the first for last.

Barber opens this speech by introducing St. Paul's Cathedral via the famous WWII photo showing its dome rising above the rubble of a shell-shocked London.

This was the view my mother saw each morning as she crossed Southwark Bridge on her walk to St. Bartholomew’s Hospital, where she was training to be a doctor. She found the sight of St. Paul’s rising majestically above the city very inspiring. Millions of Londoners felt the same way. St. Paul’s was still standing. Britain had endured.

So there was never a question about transforming this St. Paul's, never an issue of wanting to destroy it and replace it, in fact a celebration and gratitude that it survived the fire, held on through the disaster, and stayed standing. Barber's mother never encountered someone staring at the dome while waiting for the fire to come and ruin it so that replacement was the only option.

The monument that Barber seeks to honor maintains its status as an important monument precisely because the fire didn't take it, and nobody wanted it to, not even the madman in Europe whose imagination, whose vision was of a London completely destroyed-- even St. Paul's cathedral.

Barber answered his own question before he even asked it. Not all visions are worth pursuing, not all systems are waiting for the fire, and not everyone who wants to watch the world burn deserves the power to bring their imagination to life.

Posted by Peter Greene at Monday, February 20, 2017
Email ThisBlogThis!Share to TwitterShare to FacebookShare to Pinterest