One of my regular reads is Blue Cereal Education, a blog that regularly makes me say, "Gee, I wish I'd written that." Just this week, the post "It's Not About Them (It's About Us)" gave me both that feeling and a wave of flashbacks to when my children were young. 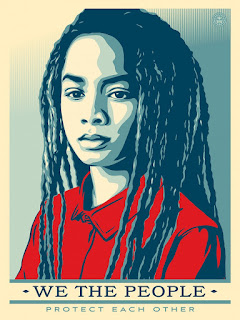 It's a good piece. You should really go read it. Go ahead. I'll wait right here.

It takes me back twenty years because this was how the children's mother and I would short-circuit all protests about why somebody really needed to be hit or "you just don't understand the awfulness of Person X"-- you don't hit people because you don't hit people. That's not how you treat other people.

As a moral principle, it really is a great simplifier, which is probably why the basic principle has been around for so long (including that Jesus guy with his "do unto others' and "let he who is without sin" and "judge not" or "the least of these" stuff). We are to extend loving, caring behavior to others because of who we aspire to be-- not because of who they are.

There are always some concerns with this approach. Surely we're not meant to extend decent, caring attention to people to people who lie to us, attack us, try to hurt us (What's that? "Turn the other cheek?" Ssshhhhh!). But there is nothing about living a principled life that means we have to be stupid or self-destructive.

As human beings, we have created lots of loopholes. One is otherize people and provide them with a label that makes it clear they aren't really people at all, as in "Well, of course, I strive to treat all people decently, but that Mugwump over there is a whole other matter."

Mostly we like the judging. We insist on including a clause that adds "who deserve it" to all "this is how we treat people" statements.

But when we start talking about "deserving" people, we invariably end up de-serving people.

In other words, talking about "deserving" is usually an excuse to select people that we can legitimately refuse to treat with love or caring or consideration or decency or kindness or whatever we're figuring out an excuse to withhold. When we talk about who deserves to be in this country, we're really highlighting the people that it's "okay" to throw out. When we talk about good pay for deserving teachers, it's really a conversation about how we can pick out the teachers who will be paid poorly. When we make convoluted arguments and assumptions that poor people "deserve" to be poor, we are justifying a callous, careless, neglectful approach to poverty and the poor.

Teachers already understand much of this. Most of us understand that the gig does not include deciding which students deserve our assistance and compassion and instruction and support-- we are supposed to treat them all well not because of who they are, but because we are teachers, and that's how teachers are supposed to behave. The principled teacher does her best for her students-- regardless of their race, their background, their gifts, their talents, their willingness, their inclination to work, their personality-- because that's what she is supposed to do.

As BCE notes, this principled approach is hardwired into our nation, that this is a place where how we treat each new arrival is based on who we want to be as a nation, not on who you are as a person. There's absolutely no doubt that we have usually failed to fully live up to that ideal, to that principle-- but it has been the business of steering toward that principle that has helped us at best get better and at least acknowledge that some things are just not right. And sometimes, we lose sight of it entirely. These are not our best moments as a nation.

When I say that public schools are foundational to our country, that's part of what I mean-- we are an institution that is supposed to be dedicated to doing the best for each child, regardless of who that child is.

But that's been suffering a toxic erosion for a while now. The modern reform era has been all about sorting and deserving-- who are the deserving schools, who are the deserving teachers. Never mind how schools are treating and serving their students-- what outcomes can they show, what test results have they generated, that prove these schools and teachers are deserving. Obama-Duncan waiver-palooza codified that further by saying that rather than honoring a commitment to support and fund education across all fifty states because that's the kind of administration they wanted to be-- instead of that, they raised a bunch of funding for schools and said, "We are only going to give this money to the states that deserve it, and all other states will be de-served."

No child that enters my classroom should ever have to prove that he or she deserves my attention, my help, my best effort. But reformsters have, for over a decade, made the central tenet of public education not "we will serve all students without asking if the deserve it" to "at all levels, everyone must always be ready to prove what they deserve."

And now in the Trump era, it becomes even worse. Because now a simple statement such as "all human beings of all races, genders and background should be treated with love and support" is viewed as a political statement. A school in Maryland required teachers to take down the series of "we the people" posters because they were seen as anti-Trump. Because that's where we are-- stating that you value human beings of all types means that you are a political opponent of the President of the United States of America.

Use every man after his desert, and who should ’scape whipping? Use them after your own honor and dignity. (Hamlet, Act 2, Scene ii)

Shakespeare reminds us that nobody deserves anything but punishment, and therefor nobody deserves to be the one who judges and punishes. The choices we make about how to treat others reveals much about our character and the principles that drive it.

In the end, how we treat others says a lot more about us than about them. The Trump administration's treatment of its many others tells us much about the administration. The refornsters treatment of teachers and schools, as well as the kind of treatment that they have pressured us to pass down the line, all the way to the students. It is a challenge to stay focused on principle in unprincipled times, but that is, these days, the gig, just as it remains the gig to treat students (and others) well, whether they deserve it or not. Not because of who they are, but because of who we hope, strive, wish to be.
Posted by Peter Greene at Friday, February 24, 2017