Pundits and the commentariat may not be able to say what exactly will happen to education under Herr Trump, but at least one group thinks they have a pretty good idea-- investors.

Molly Hensley-Clancy covers business for Buzzfeed (yes, that's apparently a real job) and she reports that since election day, investors have been expressing some exuberance about K12, the infamous major player in the cyber-school arena. The stock has shown a steady climb since November 8, working its way from 11.19 up to 17.24, hitting a two-year high for the embattled manufacturer of education-flavored cyber-product. 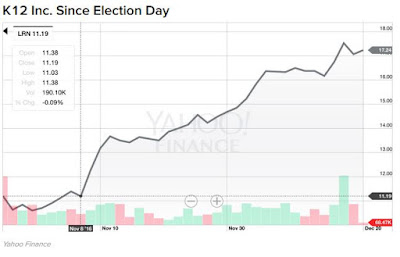 You may recall that times have been tough for cyber-charters. This summer they were slammed by actual bricks-and-mortar charter operators on the heels of a report from CREDO that showed that students lost a full 180 days by being cyber-charter... well, students hardly seems like the word.

K12 itself has had a host of other problems, including the loss of major contracts in Pennsylvania, Colorado, and Tennessee. The NCAA decided that it wouldn't accept any credits from any cyber charter using K12 materials. California just hit K12 with a $169 million settlement over false advertising allegations. This is not even close to the first time that the cyber-charter giant has been in trouble for shenanigans involving not-quite-truth-telling and general financial misbehavior.

What could possibly cause this creaking cyber-disaster-area to come bouncing back? Hensley-Clancy reports:

K12 executives have told investors the company was one of the “best positioned under Trump,” according to a note by BMO Capital Markets analyst Jeffrey Silber. The dialogue about online charters has changed, Silber wrote, as K12 executives tout the “personal” experiences that high-level Trump administration members have with the company.

Well, yes. Turns out that Dick DeVos was an early investor in K12.

So despite the fact that they've gotten virtually nothing right about virtual education, K12 is now sitting at the station waiting for its gravy train to come in. Because meritocracy and letting the invisible hand of the market reward quality and punish failure is all well and good, but first, you have to take care of your friends and stick to your ideological guns, even if they are firing blanks.


Posted by Peter Greene at Tuesday, December 20, 2016
Email ThisBlogThis!Share to TwitterShare to FacebookShare to Pinterest