Here we go again. A family in Virginia has apparently scared a school district into banning Huckleberry Finn and To Kill a Mockingbird. 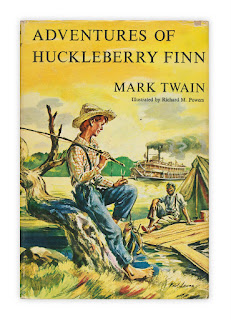 If you have been an English teacher for longer than a week, this is well-trod ground. American literature is a field full of land mines because American culture is a field full of land mines; as I tell my students every year, it is impossible to talk about American literature without talking about issues of race, gender and religion, and that means dealing with issues to which people are sensitive.

Huck Finn is a particular book banning touchstone, often held up these days for being too racist even as it was originally banned for not being racist enough. In the Virginia case, the concerned parents are reportedly speaking on behalf of their biracial high school son and concerns about the N word being presented over and over (219 times in Huck Finn, 28 in Mockingbird). The mother's complaint is also an indirect slam on how effectively the works are being taught.

For any teacher who handles sensitive material, it's hugely important to hear the concerns of parents and students and not simply dismiss them for being ignorant, uninformed or wrongheaded. People feel what they feel, and even if they are wrongheaded, nobody ever changed their feelings because someone said, "Your feelings are stupid and you should have different ones."

But this parent is wrong. There are miles of arguments out there about the banning of literary classics and why we should not do it. American culture, shared heritage, author's intent to condemn the bad words, blah blah blah. But in 2016, as we enter the Age of Trump, there's another reason we have to keep teaching these works. Call it the gaslighting defense.

Because among the many things that Trump has elevated further into the mainstream, we have the six-year-old's defense. "I never did that!" We are now taking denial to new heights with a President who is willing to declare that he never said that which we have him on tape saying.

Among the many things I'm braced for is the gaslighting of America, the attempt to talk our way out of past offenses with a determined, "I don't know what you're so upset about. That never happened." And I will not be surprised if we don't see attempts to gaslight our way past our racist past. We've heard this stuff before-- Slavery never really happened, and it wasn't that bad, and black folks actually loved it, and those terms aren't derogatory at all, and there were no long term effects because after all all those slaves are dead now so it's over anyway, and really, there's nothing for anyone to be upset about-- but we've never heard it out loud from our nation's leaders. I figure it's better than even odds that in the next four years, we're going to. A lot.

And so to all the other defenses of classic literature, let's make sure we've included the idea of gaslight protection, the necessity of reminding ourselves that, yes, this stuff did happen, and yes, it was bad, really bad, and , no, people aren't just making it up for political leverage. The best antidote to gaslighting is reality, even if that reality is ugly and hurtful. It's our job as educators to make sure that we aren't just dropping the ugly reality on our students like a pile of railroad ties; we're supposed to be right there to supply context and support and reassurance that, yes, this was just as wrong as you think it is even as we revisit our past through the eyes of authors who also knew that this treatment was wrong.

Yes, Huck Finn is a problematic text for many reasons. But it's also the first real attempt to create a truly American novel, and consequently its problems are a reflection of America's problems, from the ugly racism of slavery to the subtler racism of folks who believed they were anti-racism. But for me, that's why in this day and age teaching it is more important than ever-- to say, "Yes, this happened, and this is how we were, and don't let anyone tell you different."