Once again I'm reading a spate of charter fan fiction in which charters are lauded for out-performing the rest of the schools in their city.


"Out-perform the rest of the schools in East Egg" is a meaningless metric, and I keep trying to explain why to some folks. Let me try it again, because looking at the mess in North Carolina has given me a thought.

Let's start with one of the best graphics out there for explaining gerrymandering. It comes from an article by Christopher Ingraham at Washington Post's wonkblog, with the graphic itself adapted from Stephan Wass. 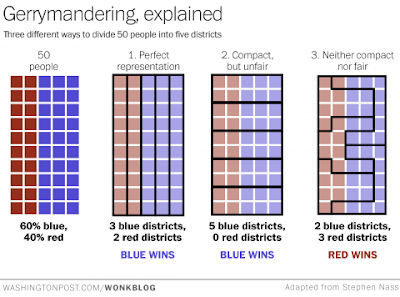 This shows how you can divide up a city to create different combinations of the voters to create particular outcomes. It explains, for instance, how Pennsylvania and North Carolina can have legislatures completely dominated by one political party even though that party doesn't have a vastly greater number of actual voters.

But now, look at the graphic again, and this time, think of the red blocks as high-achieving students.

Let's say East Egg, back when it had only public schools, looked like #2. Five schools, all containing some high-scoring students (aka "high-achieving," but as always I will remind you that "high-achieving" just means "got a high score on the Big Standardized Test") and some low-scoring students, with the proportion being such that all five schools come out "blue," which for our purposes will mean "sad and Not Good" schools (because when we talk about low-achieving schools, we just mean schools that have lots of low scores on the BS Tests).

"We must turn around East Egg," declare some Very Concerned Politicians, and soon three new charter schools open up. That takes us to #3, where the three "red" schools are the high-scoring charters, while the two remaining public schools are now very blue.

But here's the thing-- the overall total distribution of high- and low-scoring students in East Egg has not changed a bit. This whole game will still work even if all students get exactly the same score they got back in the all-public system.

Every one of the charters can brag about "out-performing" the public schools, but it means nothing. The overall total performance for East Egg has stayed exactly the same, static, flat, unmoved (exactly, in fact, as overall test results have proven to be on tests like PISA and NAEP).

"How can we gerrymander the students when we get students in random assortments?" some charter fans will say. From marketing to applying to push-outs to recruiting from outside the community, charters have shown themselves highly adept at managing their student population. No less a reformster all-star than Chris Barbic left the Tennessee ASD noting that, gee, it's really hard to lift up a school when you have to work with all of the same students that are there in the community.

So if a charter operator wants to impress me, I would need to see some data showing that the results improved for the total student population of the city where they operate. Being able to gerrymander your way to success is not the same thing as actually changing the makeup of the entire city system.
Posted by Peter Greene at Sunday, December 18, 2016
Email ThisBlogThis!Share to TwitterShare to FacebookShare to Pinterest