Do Poor Students Get the Worst Teachers?

This has been open to debate forever, but the debate has gotten more spirited ever since the Obama administration made it a matter of policy that poverty just doesn't matter if you have an awesome teacher in the room. There are three real answers to this question. Let's consider each one.

A recently-released report from the Institute of Education Sciences (part of the USED) has been touted as proof that all socio-economic levels of students have similar supplies of swell teachers. And there is also an argument to be made that since teachers in high-poverty schools are doing more heavy lifting against a greater weight of outside issues, they are actually tougher for it. I have no doubt that some of the greatest, mightiest, teacheriest teachers in the country are working in poverty-wracked schools. 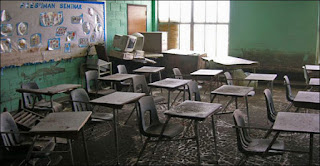 This is not a new idea. The teacher program that I graduated from was run by a small-town upper-mid-class college, but it required student teachers to work in Cleveland (i.e. poor urban) schools. Their reasoning was that if you could handle that environment, you could handle any teaching environment.

There are plenty of reasons to suspect this might be so. Many policy choices have made recruitment a challenge.

In some states, test results (which are reliably lower in poorer schools) are tied to teacher evaluation, which means that taking a job at a poor school can damage a teacher's career, even end it in states that have removed tenure and made "low performance" grounds for dismissal. Who wants to sign up for that if they have a choice?

Poor districts, particularly in states like Pennsylvania, offer less pay, which means they are low-balling in the bidding war to hire the top teaching talent. This doesn't seem like the best way to gather the best.

In some states, it's even worse. Take Arkansas, where anybody with a pulse and a college degree can be put into a classroom. Again, this seems unlikely to bring in top talent, and you can be certain that the very wealthiest districts in Arkansas are saying, "Yeah, hire us some of those special teachers with no education training at all. That's what we want for our kids."

There's research to back up this answer too, like this study from the National Center for Analysis of Longitudinal Data in Educational Research (CALDER) by way of the American Institutes for Research with a whole list of universities and also connected to IES at USED. This particular study tracked teacher gaps in North Carolina and Washington. (Matt Barnum offers explanation of why the two studies get different results.)

We Have No Actual Idea

There are a couple of problems with trying to determine who has the best and the worst teachers.

One is that we have to compare apples to hubcaps. Different schools with different populations in different communities require different skill sets. I am a pretty good high school English teacher in my ruralish high school. However, I'm pretty certain that if you threw me in an poor urban first grade classroom, I would suck. Nor do I have any idea how you would compare me to the person who has that first grade job. Is the family care GP in a small town a better or worse doctor than a brain surgeon in Korea? Who knows. Just because they are both "doctors" doesn't mean they are comparable.

Second is that teacher quality is not a solid state. Over time, we all have better days and not so better days. And how "good" we are is also a matter of which students you put us together with. One student's terrible teacher is another students life-altering agent of positive change. Just because I'm a bad spouse for Ethel, that doesn't mean I might not be a great spouse for Judy or Phoebe or Bob, and vice versa.

Third, and really important for articles like the Barnum piece, we do not have a useful way to measure teacher effectiveness. These discussions inevitably drag in some version of measuring teacher effectiveness by her ability to get good test scores out of students-- and THAT assumes that the Big Standardized Tests measure anything more useful than the student's ability to take Big Standardized Tests. There's no evidence that they do.

Attempts to spruce this issue up with Value Added Measures (VAM) have been debunked by just about anyone qualified to have an opinion.

In short, we don't know where the good and bad teachers are because, except on the far edges of the spectrum, we don't know how to identify them. We don't even know what "good" and "bad" even mean when it comes to teachers.

My own sense is that the deck is probably stacked against poor schools, not just because of all the reasons listed above, but because if you take a good teacher and overload her with too many students and too few resources in a crumbling building with lousy administrative support (and force her to use canned curriculum and scripting), you can probably make a far less effective teacher out of her.

But that's just my gut sense. I have no proof, and neither does anybody else. And as long as we're asking questions like "Is there a correlation between a Master's degree and higher student test scores," we won't get an answer any time soon. And we don't need one.

Because the question we should be asking is, "Are we doing everything in our power to make sure that students in all schools, particular schools where poverty has created more obstacles to success-- are we making sure that all schools are getting all the support and resources that they need to succeed?" This is a much easier question to answer. The only problem is that if the answer is no, then policy makers and politicians and bureaucrats and administrators have to do something other than just wring their hands and point fingers at teaching staff.


Posted by Peter Greene at Friday, December 16, 2016
Email ThisBlogThis!Share to TwitterShare to FacebookShare to Pinterest