Sarah Jones at the New Republic yesterday posted a blistering take on technocracy entitled "The Year Silicon Valley Went Morally Bankrupt." It doesn't address education, but it surely could. 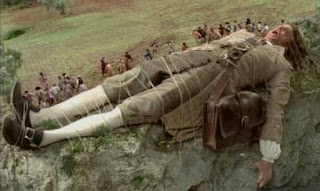 She takes us back to 1996, and “A Declaration of the Independence of Cyberspace" by John Perry Barlo, a statement of Silicon Valley's manifest destiny to rise over and above the nation that birthed it:

Barlow’s manifesto is undeniably grandiose. “We are creating a world that all may enter without privilege or prejudice accorded by race, economic power, military force, or station of birth,” he announced. “We are creating a world where anyone, anywhere may express his or her beliefs, no matter how singular, without fear of being coerced into silence or conformity.” This was more than an expression of ego. Barlow asserted a moral hierarchy, and in this new order, Silicon Valley outranked the world it had come to transform.

Barlow's vision seems to keep the moral center of American democracy, but as examination and time have revealed, it's really the blueprint for the Betterocracy-- the mobility and openness of technology do not give all citizens an equal voice, but give all citizens an equal opportunity to rise to their appropriate level, because at the end of the day, Technocratic Bettercrats believe that some people really are better than others, and those who are Better should be in charge, and those who are Lesser should shut up.

Jones connects this to a moral aloofness, a technocratic solutionism, a belief that the only problems that really are problems are problems that have a technological solution. "Show us your problem," Silicone Valley says, "and we will disrupt the heck out of it." If it's not solvable by technology, it's not a real problem.

Jones centers on two examples. One is Peter Thiel, who bullied Gawker into silence and has been riding on the Trump train. Thiel is a vocal critic of democracy, diversity, and women, and like Trump, he has suffered the opposite of negative consequences for his stances. That Trump can connect with the Bettercrats of the tech world is not surprising-- they share a fundamental belief that might makes right, that if you can do something and you want to something and nobody can stop you from doing something, then there is no reason to rein yourself in. I'm not sure that these folks are morally aloof-- it's just that they are their own true north on the moral compass.

Jones also tosses out Mark Zuckerberg's unwillingness to come to grips with the journalistic power of facebook, and for extra fun reminds us that Theranos founder Elizabeth Holmes, who got caught touting a completely fictitious medical test company is still running that company, now claiming some new technomedimarvel, as if she hadn't been outed as an untrustworthy liar of epic proportions.

"Tech moguls," Jones writes, "strive to remake the world, but this year they behaved as if they owe us no explanation for their decisions."

But she of course need not have stopped with her three examples, nor did 2016 represent a sudden new emergence of this issue. Netflix mogul Reed Hastings famously complained that democratically-elected school boards should be done away with (they just get in the way of their Betters). Stephen Barr, who moguled the Green Dot Charter school chain, just backed off his run for Los Angeles mayor-- he was qualified to be mayor because he had run the charters, and he was qualified to run the charters because he wanted to-- but had originally launched the run because he intended "to disrupt the political establishment and turn our city around."

Education reform is rife with these Techno-Bettercrats. Sir Michael Barber, head mogul of the multinational edu-juggernaut Pearson, does not at the end of the day justify their attempts to remake the education system as profitable or good for kids, but as an act of Higher Moral Purpose. Sure, remaking the world when the world resists being remade presents some challenges, but those challenges never create a need to self-examine, to check the poles on one's moral compass. No, this is the reaction:

Be that as it may, the aspiration to meet these challenges is right

And of course, Jones has passed up the lowest hanging fruit of all-- Bill Gates, who believes that he has the right, even the obligation, to remake the nation's education system into the form that he believes is right. Nobody elected him, nobody asked him, and at no point did he submit himself to any kind of democratic process. Because democracy is a process by which a whole bunch of Lessers who shouldn't have a say inflict their will on their Betters. Gates has some ideas about how schools should work, so he's just going to implement them without discussion or explanation.

There's been a sudden shock that Donald Trump, in all his autocratic authoritarian glory, is going to be our President, but the truth is we've been working our way up to this for a while. Champions and vocal supporters of democracy have been few and far between. In government, both dems and GOP have looked for ways to thwart the will of the electorate, whether it is trying to skew elections by gaming the rules or trying to create policy out of the offices of unelected department appointees. All around the nation, giants walk among us, devoted not to the rules or the laws or some undergirding principles, but to their own greatness, their own vision, and their own power and ability to implement those visions. They are genius Gullivers, held down by puny Lessers and unions and the stupid government functionaries that get themselves elected by those Lessers.

And those Lessers that are hungry or homeless or struggling in minimal employment? They would be better off if they just learned to Stay in Place instead of trying to leach off their Betters. If I'm a Better and you're not-- well, maybe you deserve a little help, but it will be what I choose to give you and damn sure not what you try to take from me. I have wealth because I deserve it. It's mine. If you wanted some of this, you should have been better. In the meantime, I will certainly try to be benevolent and give you a little of the help that I think you deserve.

American exceptionalism? It's not America that's exceptional-- it's the small group of techno-disruptor-visionaries who aim to rebuild this country the way they think it should be built. They don't need a moral compass-- they are their own True North. And as they strip away the tiny people and democratic traditions holding them down, one by one, they have less and less need to pretend otherwise.


Posted by Peter Greene at Friday, December 09, 2016
Email ThisBlogThis!Share to TwitterShare to FacebookShare to Pinterest