Over at EdWeek, Peter DeWitt asks the question "Have educators been bystanders too long?" I like the question because it doesn't even waste time asking if educators are bystanders, because, yes, that's what we do. 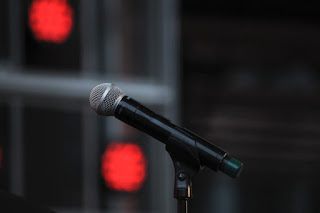 This is probably one of the reasons we don't get more respect from business-folks. In the private sector, you sometimes have to play hardball. You "negotiate" by being non-compliant, looking across the table at the people demanding you do something and saying, "Make me." But schools are a culture of compliance. Many (almost certainly too many) teachers expect their students to be compliant, and in turn, we expect to be compliant with our administrators. I cannot begin to guess how many times some local union leader has had this conversation:

Teacher: My principal told me to do this thing, and I think it's wrong.
Union: Well, did you tell her you wouldn't do it?
Teacher: Are you kidding? She'll yell at me. She might put a letter in my file.

Here's a story about the culture of compliance. Years ago, my school board was complaining about an item forced on them by the state. Every member agreed that the state was dead wrong. One member suggested, "Well, what if we just don't do it?" The superintendent, principals, and several of those same board members looked at him as if had just suggested slaughtering puppies on the schoolhouse steps.

From top to bottom, schools run on one simple principle-- you do as you're told.

This is one of my pettest of peeves-- teachers will sit through a meeting or development session, smiling, nodding, quietly agreeing with everything, and then, afterwards, walk out the door and start talking to each other about everything that was wrong with the message. Too many teachers can't conceive of a middle ground somewhere between being raging asshattery and silent compliance.

Now more than ever, this is a problem. I'm still convinced that one of the reason teacher voices weren't included in the past few waves of reformsterism, from No Child Left Behind through Common Core, is that reformsters determined that all they needed to do was dictate from the top and teachers would just fall in line. Teachers have to bear some of the responsibility for creating the impression that we would comply quietly with whatever our Noble Trusted Leaders told us. This dynamic was certainly behind the occasional attempt to distinguish between teachers and teacher unions ("Teachers love this just fine, it's that cantankerous union that causes the problems"). I can distinctly remember hen state-sponsored PD shifted from trying to win our hearts and minds with a barrage of baloney to a more direct, "This is what's happening. Do it, or else."

As DeWitt puts it:

We are under a barrage of negative stories, fake news, and compliance and accountability that will only lead to more compliance and accountability, more fake news and negative stories. What are we getting out of it? Nothing. We still feel like we have no voice and after years of experience and paying to go to expensive schools to get degrees so we can remain in our practice, we feel like we are not good enough at what we do.

Between local, state, federal, and future Trumpian issues, educators face a wide range of Stupid Things being imposed on the profession, almost universally implemented without the input of educator voices. We are complicit in this because of our own silence-- the first step in making your voice heard is to use that voice, to speak.

When, how, and for what cause is a personal decision. Only you know the specifics of your local situation, only you know how much push back you can expect (there is an important difference between "My boss will probably yell at me' and "My boss will get me fired"). But I am not exaggerating when I say that some folks' strategy is "I will be sad about this Bad Thing, and Somebody Important will notice how sad I am and decide to do something to make me less sad." This is not good enough. If your image of teaching is "I just show up to work and do my job and let everyone else decide the policies and procedures that I have to follow," then you have come to the profession fifty years too late.

Maybe join your local union, or maybe not; hell, maybe your local union is part of the problem and you need to go to meetings and be a pain in the ass. Blog. Write letters. Share articles that you think matter. Go to professional gatherings and learn new stuff. Call your elected representatives. Use your inside and your outside voices. When you're sitting in a professional development meeting and someone presents a big fat slab of baloney, make them uncomfortable.

DeWitt's jumping off point was a book by Michael Fullan and Andy Hargreaves, Bringing the Profession Back In (Learning Forward. 2016). Fullan and Hargreaves suggest that idea of self-efficacy has been stripped from teachers, especially in the US, because there has been a, 'barrage of wrong solutions thrown at the profession.'" But the good news is that we could start talking again at any time. Just, you know, open your mouth and let your voice out.

No, people will not suddenly snap to attention, look raptly at us and declare, "You--you're talking!! Thank God!! Tell us what to do!" To imagine educators as the dominant voice in education-- well, that's just crazy talk. But we need to speak up, get involved, get in the game, get uncomfortable, and just generally stop standing on the sidelines watching the game as if we weren't expert players.