Why This Teacher Supports Sanders for President

Every political cycle is a sad reminder that public education in general and teachers in particular are political orphans. Neither party even pretends to be interested in or supportive of traditional public education and the people who work in that sector. Where once upon a time, kissing a baby could be reliably followed by thanking America's teachers. Now both traditional parties just want to punch us in the face.

None of the 147 Presidential candidates at any point showed any concern about making nice with teachers or standing up to the institution to which we have devoted our lives, the institution which is the very foundation of our country, our democracy. 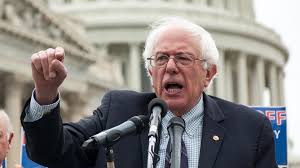 No, not even Bernie. We've been able to get him to cough up a couple of usable quotes that would suggest that he's a fan of teachers and public education, which puts him ahead of Hillary who bent over backwards to avoid letting one sentence worth of charter school criticism upset any of her deep pocketed backers [but even at Sunday night's debate, given a chance to directly address education and educator issues, he punted]. Pretty sure I missed the part where she dispatched Bill to reassure public school teachers that any of her zillion pro-charter comments were no cause for alarm. And the closest that any GOP candidate came to saying something nice about teachers was that time John Kasich said that he would abolish teacher lunch rooms, which sounds mean but, hey-- at least he didn't say he would abolish letting teachers have lunch at all.

If I were a one-issue voter, a candidate who voted his job, I'd have a choice between  a symbolic for D. Jill Stein or just staying home.

Let's not kid ourselves. In the political world, nobody has our collective backs.

But I'm not a single-issue voter. Well, actually, I am. But it's a bigger issue than public education, even though it's the same issue.

My issue is democracy.

Sanders doesn't talk much about education, and I don't get the impression that it's something he's really studied up on or fully grasped.

But he talks a great deal about the ways in which our democracy has been stripped from us, eroded by the toxic spread of big money as the very rich buy up our government, our processes, and, almost without exception, our candidates for major offices.

This ongoing attempt to milk the taxpayers while stripping them of their voices, their say, their ability to help steer the national bus-- that is the problem that, right now, is virtually all problems. The dismantling of our public education, our selling off of the pieces, our transformation of universal public education into a system that serves the needs of only a few, a system that enriches the already-rich while trying to get away with training many young citizens to be nothing more than drones, fodder for their corporate overlords-- that grand perversion of public education is mirrored in the co-opting of our food industry, our military industry, our decaying cities, our twisted political system, our money-sucking health care system.

I care, obviously, about our public education system, about the teaching profession, about the care and nurture of our young people. But I am also aware that the gutting of public education is a symptom of a larger problem, like a shirt that keeps getting bloody because it's being worn by a person with a knife driven deep into his chest. And I can live with somebody who's not too concerned about the shirt if he's focused on removing the knife and healing the wound.

I'm concerned about the shirt, and the blood. Sanders is not paying so much attention to the shirt, but he is totally on point about the knife and the wound and the need to draw the weapon out and heal the breach.

To be less metaphorical, education is not anybody's issue-- including Sanders. But the toxic rot and corruption that he rails against in the country is the same toxic rot that is eating at public education. I can get behind that. I'm not a naive kid, and I don't expect miracles. But I can get behind a man who at least talks about the knife and the wound. That's why this teacher supports Bernie Sanders.
Posted by Peter Greene at Sunday, March 06, 2016