When You Open Schools To Religion...

There has been a push for a while now to open public schools to religion, and it has been pushed a variety of ways, such as the case Good News Club v. Milford Central School.

That suit made it all the way to the Supreme Court in 2001. The Good News Club is a program of the Child Evangelism Fellowship, a group founded in 1937 by Jesse Levin Overholtzer with the express purpose of evangelizing children. They claim 109,828 clubs worldwide. In the 90s, a couple decided to establish one of these after-school clubs in Milford, New York, but the school said no based on the stated intent to have  "a fun time of singing songs, hearing a Bible lesson and memorizing scripture." Deeming the club religious instruction (which it totally was) the district said no, and many lower courts agreed. SCOTUS, however, did not. Justices Thomas, Rehnquist, O'Connor, Scalia and Kennedy were okey-doke with this (Breyer concurred in part).

And so US school have to provide use of the facilities to after school religious groups.

And so, here comes the next obvious step.

Meet the After School Satan Clubs.

Religious counter-protesting has a fine history in this country, with such notable groups as the Church of the Flying Spagetti Monster. The Satanic Temple is one such group, with their not very diabolical motto "Empathy. Reason. Advocacy." They've run a number of attention-grabbing activities, including declaring abortion a sacred ritual as a direct challenge to the Texas abortion laws. 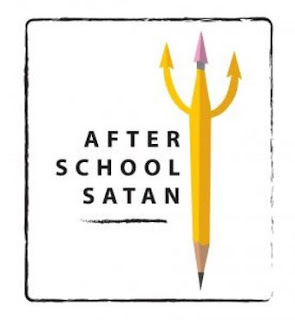 After School Satan Clubs ("Educatin' with Satan") also seem to be out to make a point. The club is aimed specifically at schools with Good News Club chapters, and as its mission--

Proselytization is not our goal, and we’re not interested in converting children to Satanism. After School Satan Clubs will focus on free inquiry and rationalism, the scientific basis for which we know what we know about the world around us.

We prefer to give children an appreciation of the natural wonders surrounding them, not a fear of everlasting other-worldly horrors.
Their FAQ include an answer to the question why:
The pre-existing presence of evangelical after school clubs not only established a precedent for which school districts must now accept Satanic groups, but the evangelical after school clubs have created the need for Satanic after school clubs to offer a contrasting balance to student’s extracurricular activities.
They have made their point in a handful of districts, where parents have seen info about After School Satan Club and freaked the hell out.
One Moline parent, who shared a photo of the club's flyer online, received incredulous responses to her post, including this: "Wait what????? How is this even a thing? Who approved this?"
The word "approval" is exactly on point--breaking down the wall between church and school will inexorably lead us to a world in which folks call for government to approve religions. Historically, this has never ended well. Somehow people keep expecting that religious freedom should only mean freedom for their own religion. But when you break down the wall between church and school, you should not be surprised when the Satanic Temple walks through the gap.
(Someone popping up to explain that this is a super argument for choice in 3.... 2..... 1...........)
Posted by Peter Greene at Sunday, January 16, 2022
Email ThisBlogThis!Share to TwitterShare to FacebookShare to Pinterest