One more innovation that nobody asked for, the hologram professor is another idea from the ed tech folks.

Much of the noise seems to be in the post-secondary world where-- well, here's one pitch:

The hologram professor is an innovative educational experience based on “telepresence” and, crucially at this juncture for higher education, it can recreate the natural dynamics of face-to-face environments – by creating a hologram of the lecturer in multiple classrooms at once, offering greater closeness and warmth for distance learners compared with current videoconferencing systems. Knowledge and experiences can be exchanged in real time while students interact and carry out activities in their classrooms. 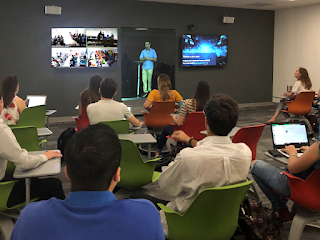 In this version (from Mexico), the professor stands in front a black background with a standard batch of videoconferencing tools (camera, microphone, speakers)--which is our first clue that we aren't really talking about a hologram at all, but a regular 2D image projected on a "holographic screen." The students sit in their various classrooms, and the professor sees them on monitors. There's also a screen running slides, materials, whatever. This model--a full body live video version of the old videoconference teaching model--is popular in some places.
There are other models out there, most notably models that depend on some sort of augmented reality (AR) headset rig. These could involve actual 3D teachers, the hinted-at catch here being that to actually record a hologram involves multiple camera images being scanned and combined and generally not something that can be done live. So you get a 3D recording, without student interaction.
The first model allows for interactions, sort of, and in one version, the teacher can move around a bit.
But the bottom line here is that when someone is talking about a hologram teacher they are either talking about A) a fancier version of the same instruction-by-video already available Youtube or B) a version of Zoom with a bigger screen so that you can see the teacher's whole body and not just her face. And to get A, there will be a significant investment in hardware and techs to run the program.
Also, any discussion of this has to include this tweet in response to an article about holoteachers:

President of my college touted this idea in a dept meeting 15 yrs ago. Students will get access to "real professors," he said to a room of living profs. My usually quiet colleague's response? "Ok, before you bring in the hologram, do you think you could fix the clock in 216?"

So while this is another of those ed tech developments that has been "just around the corner" for twenty-sone years, it doesn't look like anything really useful is showing up any time soon.
Posted by Peter Greene at Thursday, January 13, 2022
Email ThisBlogThis!Share to TwitterShare to FacebookShare to Pinterest