Transparency As A Chaos Tool

A remarkable feature of Critical Race Theory panic is that we were told, early on, what was being done, and why. You've seen this quote multiple times, but let me remind you: 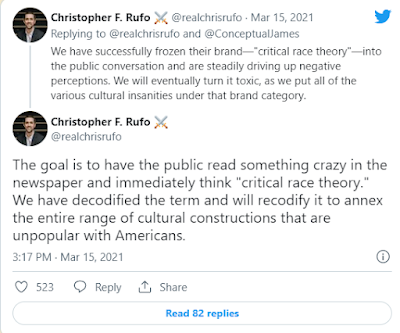 Well, here we go again.
In a series of tweets this month, Christopher Rufo, a fellow at the conservative Manhattan Institute who has been instrumental in drawing opposition to racial sensitivity training, said shifting from pushing bans on teaching critical race theory to pushing curriculum transparency bills is a “rhetorically-advantageous position” that will “bait the Left into opposing ‘transparency.’”

“The strategy here is to use a non-threatening, liberal value — ‘transparency’ — to force ideological actors to undergo public scrutiny,” Rufo said.
Rufo's Manhattan Institute and the Goldwater Institute, whipped up sample legislation that various states have been following, and we're seeing these bills pop up everywhere. They're mostly identical to this one out in Utah or the one that got vetoed in Pennsylvania.
It's an odd time to be pushing such a thing; thanks to technology, classrooms are more transparent than ever, with learning platforms like Google Classroom putting every piece of daily work in a classroom on display where any parent can see it. And of course transparency is important; I have not met in my lifetime a teacher whose position was, "Nobody can ever know what we do in here." Because teachers do their work with students, and expecting students to keep the workings of a classroom secret is just as foolish. Also, teachers and schools have a responsibility to the taxpayers that pay the bills.
But all of that is only important in a good faith discussion about transparency, and that's not what's happening right now. Reading through dozens of accounts of these bills and the rhetoric pushing them, I find two groups emerging.
Group one consists of the people who are just certain that Evil Teachers and their Commie Union are secretly practicing all sorts of nasty indoctrination on students that they are bent on covering up, and only by forcing transparency will we be able to catch these evil doers and put a stop to them. As Rufo put it, "With curriculum transparency, every parent in the country can become an investigative reporter and expose any school that promotes racialist abuse." Do note the use of the word "abuse," which is also used in plenty of the anti-crt report-your-teacher-to-the-state laws out there (eg Virginia).
Group two consists of folks from the old education disruptors crowd. The pandemic has been a great time for some of them; think of all the years they wanted to manufacture an education crisis, all the work that went into boosting high stakes testing in order to manufacture proof that schools were in crisis and collapse, and now COVID comes along and hands them the disaster they always wanted. Everyone is stretched thin and tense an overtuned banjo, so you just come along and pluck on some parents and trot out time-honored classics about how schools are going to steal your children's minds, and boom-- you've got chaos and destruction even more compelling than a hurricane.
I'll add the usual caveat--not all reformsters. I'll remain convinced that there are people in that crowd with a sincere concern about public education. And yes, there are probably some people in there with a sincere concern about school transparency. But right now they are all taking a back seat to folks who believe that, as Ron Johnson observed, it's not society's responsibility to take care of Other People's Children. Education should be an open marketplace where folks are free to make money however they can, and parents fend for themselves without the government backing them up, protecting them, or giving them more than an ever-shrinking token payment to cover expenses. To achieve that dream, first the current version of public education must be swept away, so anything that sows chaos, distrust, and destruction, is a welcome tool.
Is there a worthwhile, even important, conversation to have about transparency in education? Absolutely--important and never-ending. But the conversation that's being forced on education right now is not that conversation. This is just more chaos and confusion, one more tool for dismantling the public education system. This is a conversation that won't even produce any useful transparency beyond what we already have. It'll just give teachers one more reason to feel piled on, distrusted, accused, and burdened with time-wasting baloney, and it won't matter if some get fed up and quit, because for some folks, anything that further busts up public education is a win.

Posted by Peter Greene at Sunday, January 30, 2022
Email ThisBlogThis!Share to TwitterShare to FacebookShare to Pinterest