This was rocketing around the Book of Face this morning. It's not encouraging, but I have verified it. 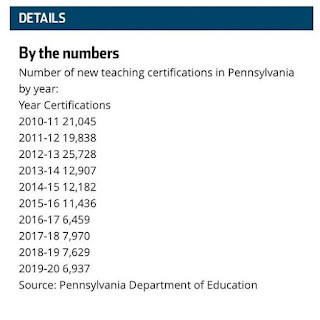 The actual source of the data is what's known as the Act 82 report, which requires the state Department of Education to report on how many Instructional Certificates it issues every year, which is a good measure of new teachers. I'm looking at the spreadsheet for Act 82, and I can report a few details to go with these lousy numbers.

Act 82 also breaks down new certs by the college that birthed them, and virtually all of the state's heavy hitters saw big drops over the last decade. A handful (Geneva, Grove City, Tork, West Chester) hung on or improved. Geneva and Grove City have small programs and are very conservative schools--make of that what you will. Many of the big programs have seen a collapse over the last decade of around 50%, driving or driven by shutdowns of some or all of their teacher programs.

At this point, there's no reason to be mystified about this. We're talking about a generation that has seen teachers maligned and reduced to test-prep content delivery units. They have seen public school denigrated and teachers micro-managed, and they watch teachers struggle to support a family on stagnant salaries. They are choosing a different path. These numbers just help see clearly how bad the problem has become.

Bonus: If you'd like an even deeper dive from an actual scholar, here's a report on this data from Ed Fuller and Andrew Pendola at Penn State.

Posted by Peter Greene at Saturday, January 08, 2022
Email ThisBlogThis!Share to TwitterShare to FacebookShare to Pinterest