Ron Johnson Says It Out Loud: Other People's Children Aren't My Problem

Senator Ron Johnson started out the old-fashioned way--working at company created and funded by his father-in-law, as an accountant. In 2010, as a previous political virgin, he rode the Tea Party Wave into a Senate seat for Wisconsin (he defeated Russ Feingold). When he ran again in 2016, he was backed by the Club for Growth and won with 50.2% of the vote. 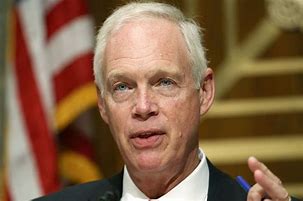 He doesn't believe in climate change (calling it "buillshit"). He has agitated to cut taxes and stop raising the debt ceiling, and he's a sup0porter of tax cuts for the wealthy (trickle down, you know). When John McCain kept Obamacare alive with his vote, Johnson speculated that it was late and McCain had a brain tumor "So some of that might have factored in." As chair of the Senate Homeland Security Committee, he has held hearings to platform some fringe ideas about COVID, and he has fed a number of baseless rumors, including the vaccinations being fatal; YouTube suspended his account. He supported the end of DACA, and he has been a big Trump supporter, including arguing for the idea that there was a conspiracy against Trump at high levels in the FBI. He was all wrapped up in the Ukraine-Trump scandal as well, and backed several of Trump's fraud claims about the 2020 election. January 6 was, in his estimate, just a bunch of patriotic folks and not as scary as if they had been Black Lives Matter.

There's plenty more, but you get the idea. He's that guy. Not as fringe as you might hope he was (also, he turns out to be about my age, which surprised me--I somehow imagined that he was a much older guy), but definitely over on the Trump-Koch corner of the political spectrum.

So when Johnson offered this quote--well, it fits with what a certain slice of the political world appears to think. It's the quiet part out loud.

During a tour of a business headquarters in La Crosse, Wisconsin, Johnson offered some thoughts, including blaming the Biden administration for inflation. Then this:

“People decide to have families and become parents, that’s something they need to consider when they make that choice,” Johnson said. “I’ve never really felt it was society’s responsibility to take care of other people’s children.”

Johnson says instead, it’s society’s responsibility to provide the opportunity for people to get good jobs to support their entire families.
Emphasis mine. This was in reference the government helping parents find child care (he doesn't support it) and reducing unemployment benefits to force them back to work (he's all for that), but the principle also applies to education.
When it seems as if certain corners of the conservative world are intent on breaking down and busting up public education, this is the principle--it is not society's responsibility to take care of other people's children. This is behind resisting putting money and support into public ed, and it's also behind voucher systems, because the point of voucher systems is not to finance or "empower" parents, but to cut them loose from government support by making them personally responsible for getting their own kid's education. The voucher is just a small way to make it look pretty.
But it's that guiding principle that Johnson articulates so clearly-- it's not my responsibility to take care of other people's children, and if they decided to have children without knowing for certain that they would never need help, well, that's their bad choice and not my problem.
There are layers of irony and sociopathy here, starting with Johnson's personal fortune existing because his father-in-law decided to help support somebody else's child. And we're not even going to get into the "choose to be a parent" piece of this from someone who staunchly opposes any abortion (and who will disinherit his children if they have a child out of wedlock--really). And yes, Johnson opposed the Obamacare birth control mandate. Safe to say that Johnson does not believe it takes a village to raise a child.

Posted by Peter Greene at Thursday, January 27, 2022
Email ThisBlogThis!Share to TwitterShare to FacebookShare to Pinterest