Remember Social Impact Bonds? They've been around for at least a decade or so (here's an explainer I wrote in 2015). Also called "pay for success" programs, these are another instrument for privatizing public stuff.

As such, they make an appearance in the new book The Privatization of Everything, a must-read from Donald Cohen and Allen Mikaelian. The book is a deep dive into the many, many, many ways in which privatization has wormed its way into the public sphere in everything from prisons to pharmaceuticals to patents to health care to municipal water systems to parking spaces. And roads. And the weather. And, of course, education. You should buy this book, and read it slowly and carefully while sitting down. 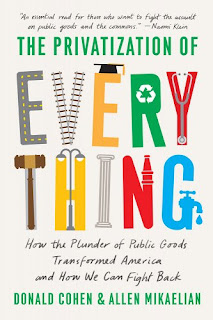 Tucked in the book (page 175) is a look at social impact bonds, and reminder of what a lousy scam these things are, a great method for "taking money from a public good and transforming it into private wealth."

What the hell are social impact bonds? This is always hard to explain, starting with the fact that they aren't actually bonds. They're a deal for private investors to fund social welfare programs and make a profit doing it, as if it were a literal investment.

The steps as listed by the Corporate Finance Institute are:

1) Identify the problem and possible solutions

It's a chance, as one site says, for "doing good while doing well." It's also a creepy way to monetize people's struggles.

So, for instance, Cohan and Mikaelian explain one SIB program that involved veterans. The VA looked to set up a program to help deal with PTSD and veteran suicides. They ran a pilot, and the turned to investors to scale it up. Those investors would get back all their money, plus up to 18% bonus based on reaching certain numbers of veterans having sustained employment.

The price tag for the scaled program was $5 million, and the SIB "investment" certainly looks a lot like a plain old loan with a huge interest rate.

As Cohen and Mikaelian point out, there is some weird reasoning going on here. The premise for many SIB programs is that government needs private investors because government can't afford to finance the program itself--except that it's going to pay that same amount plus extra to pay the investors. It's like saying, "I can't afford to pay a babysitter $25 to babysit tonight, so will you please pay them for me, and then if they do a god job, I'll pay you $30."

Worse yet, an SIB leaves all the risk with the government. If the program doesn't succeed, it's true that they investors don't get paid--but the social need still has to be met, plus cleaning up whatever mess the failed program left.

SIBs also rest on the notion that the private sector will drive efficiency and innovation that will make the program leaner and better. This is baloney.

First, in practice, SIB pretty much never fuel innovation, because investors like sure bets. From a NYT piece about SIB's in 2015:

“The tool of ‘pay for success’ is much better suited to expanding an existing program,” Andrea Phillips, vice president of Goldman’s urban investment group, said in an interview on Wednesday. “That is something we’ve already learned through this.”
And as far as the efficiency goes, this is just the same old Myth of the Gifted Amateur, with which we're already plenty familiar in the education field. In fact, SIBs have targeted PreK programs, because investment bankers know so much about early childhood education. But they do now how to bet carefully; an SIB in Chicago funded the expansion of a proven program, using trained personnel and district infrastructure. Mostly what Goldman Sachs provided was a very expensive loan that the district has to pay back. In Utah, as the authors report, Goldman Sachs bankrolled a program that promised lowering the number of children needing special services and then used pre-existing programs and a population of students that was already free of special needs. They did nothing and brought no value to the program, but they still made a bundle on it.
And let's not even start on the heavy lifting involved in imagining that Goldman Sachs is in a position to teach people about disciplined  efficiency.
SIB programs also depend on stark, clear definitions of success, preferably a number of some sort, what one interviewee called "incentives that would be considered corruption pressures." This doesn't just encourage a simplistic, bone-headed definition of success--it requires it. It's Campbell's Law on steroids, goosed up by putting a bunch of investor money on the line. Put another way, SIB investors don't get paid for changing reality, only for hitting their numbers.
There is something very icky about the idea of investment bankers sitting around a desk cheering, "We kept 123 kids out of special ed! Ka-ching!!" And there's something unpleasant about having our tax dollars used to hire somebody to hire somebody to deliver a program.
I've talked for years about how high stakes testing turns schools upside down; instead of serving the students, the upside down school now demands that students serve it by generating the right test numbers. This is more of that. Theoretically with SIB, we still get the social welfare programs we asked for, only now they are set up not to serve the human beings who need them, but to serve the investors who put the money into them. Every dollar spent on a child cuts into investor profits, so make sure to spend the least possible on the service that is actually supposed to be the point. It's no way to run a school--or much of anything else.
I'll finish with this paragraph from the book
The rise of social impact bonds fits a pattern. Throughout our history, private interests have worked to separate the worthy from the unworthy poor and to reinforce the idea that assistance is charity--a benevolence from on high--not a right and responsibility that we should bear as citizens. Social impact bonds and pay-for-success models are, far from being innovative and disruptive, simply a slightly altered means to the long-standing goal of putting the private sector in charge and sidelining the public while separating citizens from government and from each other.


Posted by Peter Greene at Wednesday, January 05, 2022
Email ThisBlogThis!Share to TwitterShare to FacebookShare to Pinterest