VA: Youngkin Invites Everyone To Turn In Teachers

Figuring that pitting parents against schools had won him an election, Governor Glenn Youngkin has made good on his pledge to attack public education and the teachers who work there.

He started right in with an edict that schools should not teach anything "inherently divisive," one more anti-CRT law so fuzzy, subjective, and poorly-conceived that it will chill teaching of any subjects that anybody might object to. The text is spectacularly vague, and though it contains a list of some "divisive concepts" that are specifically naughty, its reliance on that "divisive concept" language guarantees that schools across the state will have no clear idea what exactly is forbidden, and so administrations not in the mood for a fight will simply instruct teachers not to talk about race, gender, or pretty much anything that might upset anybody. Is evolution divisive? History of the Civil War (particularly in Virginia)? My students were pretty divided on whether Lady MacBeth is a redeemable character or not. In fact, we used to stage debates, but I suppose those are inherently divisive, too.

To insure that the decree carries maximum power to intimidate and silence teachers, the governor has followed the lead of states like Texas and Florida and instituted a means for parents and community members to turn in any teachers for being naughty. As he explained in one interview:

For parents to send us any instances where they feel that their fundamental rights are being violated, where their children are not being respected, where there are inherently divisive practices in their schools. We’re asking for input right from parents to make sure we can go right to the source as we continue to work to make sure that Virginia’s education system is on the path to reestablish excellence.
Brown shirts and cultural revolution posters are optional.
James Fedderman, the head of the Virginia Education Association called the tip line "poorly conceived" and "designed to intimidate educators simply trying to do their jobs," which sounds about right.
But of course you know what else happened next. The tip line has apparently been hit with a variety of reports, like a complaint that Albus Dumbledor "was teaching that full blooded wizards discriminated against mudbloods." Some of this has been goaded on Twitter by folks like human rights lawyer Qasim Rasgid. And John Legend correctly pointed out that under the guidelines of the decree, Black parents could legitimately complain about Black history being silenced (because, as sometimes escapes the notice of anti-CRT warriors, some parents are Black). Ditto for LGBTQ parents. 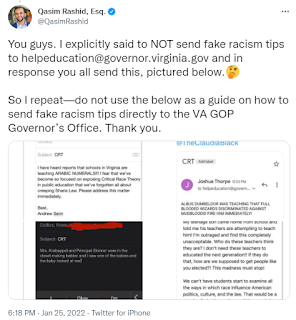 Also, this has been floating about the interwebz. 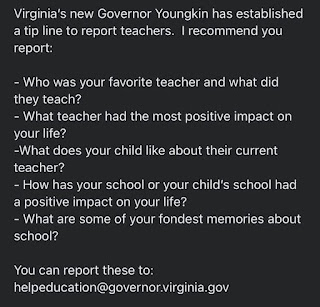 Anyone can send their reports to the tip line email:
helpeducation@governor.virginia.gov
So if you have some thoughts about all of this that you would like to share with the governor, just send them to

helpeducation@governor.virginia.gov
Which is of course only for serious, meaningful, and real complaints about divisive concepts, and not fake racism tips or other things. I certainly wouldn't consult this twitter thread for any ideas, but I would send to
helpeducation@governor.virginia.gov
only the kind of serious comments that such a state-sponsored attempt to intimidate and silence teachers deserves.
Posted by Peter Greene at Wednesday, January 26, 2022
Email ThisBlogThis!Share to TwitterShare to FacebookShare to Pinterest