Kansas has found a way to leap to the head of the pack in the race to dismantle public education.

Mind you, Kansas has been working on the problem for a while. You may recall that Governor Brownback and a GOP legislature tried to turn Kansas into a free market laboratory, with "business friendly" tax cuts that have put the state's finances in free fall. The attempt to implement a full-on super-GOP model left the state broke. Tax cuts for the wealthy didn't trickle down, and the state is now in a mess (while Brownback runs the standard playbook of throwing attention to social issues, as if gay marriage is somehow responsible for Kansas poverty). It is no wonder that education is underfunded in the state using a formula that the state supreme court says is unconstitutional. 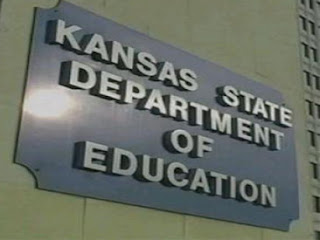 And that's not all. Kansas has voted to allow unlicensed persons to teach in the classroom. They voted to strip teachers of all job protections in a bizarre fracas that featured the Koch Brothers coming to Topeka to extort votes out of moderate GOP members (Nice re-election prospects you have there. Shame if anything happened to them). They have suggested that teacher evaluation could be handled by the school janitor. And they have been watching a steady exodus of teachers from the state. All that on top of the purposeful and deliberate underfunding of education, which is where the state supreme court shows up to tell them they are violating the state's own constitution. And they responded to that issue by trying to rewrite the rules for getting rid of obnoxious judges. Most recently, the state handled its ESSA plan comment period so very quietly that only about 20 citizens commented on the plan (Ed chief Randy Watson says that's because the citizens are "attuned to where the board is heading" and not because they were kept in the dark).

So here comes the Kansas Can School Redesign project. Seven school districts have been selected (each given, for because this is their "moonshot", the name of one of the seven original Mercury astronauts-- the folks in Kansas do know that we actually made it to the moon already, right?)

The redesign is supposed to highlight several principles--  developing individual study plans, measuring social and economic growth, improving graduation rates and post-secondary completion and addressing kindergarten readiness, and the original press was pretty vague about how that would happen, exactly. The buzz has included many of the usual reformy vocabulary (this will be all about "hard data" and being ready for "real life").

But last Wednesday, Kansas State Board of Education members were given a more specific briefing about what is in the wind. And it's... ambitious.

Brad Neuenswander, the deputy commissioner who seems to be taking point on this, suggested that the entire delivery system for education is going to change:

"I would speculate that if you walked into one of those districts, you’re not going to see a traditional setting," he told the state board Wednesday. "I think you’re going to walk in there and maybe see a group of kids not based on age, but based on experience and where they’re at. You may see 30 kids in a room with three adults supporting that. The whole structure of it, it’s hard to define."

Meanwhile, the state has changed the rules on how accreditation works (now it's districts, not schools, that are certified).

Students need no longer be organized by grades, nor do school years have to be defined by hours in the classroom. The primary concern is "individualized education, focusing on the unique needs of each student." All of which suggests that Kansas just convinced seven school districts to go all in on competency-based education. Certifying a district instead of schools makes a lot of sense if you aren't really going to have schools any more-- just students who can plug in to the computerized "personalized" learning system from wherever. And you'll notice that Neuenswander expects to see three "adults," not necessarily teachers (though that point is moot, since Kansas has already scrubbed most professional requirements to be a teacher).

Another red flag? Kansas has apparently devoted around $0.00 to back this change. Which would be insane-- unless you think businesses will step in to do the heavy lifting. This supremely vague plan is supposed to be ready to launch in the fall of 2018. How any district would completely redesign itself in less than a year is a mystery-- unless, of course, they just hire somebody to plug in a pre-made CBE program. Just call Summit.

Meanwhile, there is one huge red flag for the program's survival. Many discussions of it stress the idea of non-academics, the need to teach "character development, citizenship and work ethics." Back in the nineties, when CBE was called Outcome-Based Education, this is exactly what killed it dead. As soon as it became clear that the idea was for schools to teach students to have the Right Values and live the Right Way, conservatives rose up and stomped the whole initiative (I remember it well because Pennsylvania was Ground Zero for much of the stomping).

So it will be interesting to see how Kansans react to discovering that not only will the school be teaching their child values and proper attitudes, but that software will be evaluating those qualities-- and recording the data to go in the child's permanent, corporate-owned record. I have to believe that at least a few folks will sqawk.

It's true that a pre-requirement to become a Mercury school was to get the cheerful cooperation of staff and community. But one wonders just how clear and specific the early information released to build buy-in was.

Twenty-two more districts are scheduled to launch in 2019-2020. Kansas looks on track to land on a planet where they barely have to provide public education at all. Congratulations?