Remember when you could buy lots of food that was fried? But then we sort of collectively decided that "fried" was a synonym for "wildly unhealthy" and marketeers searched for a substitute. Now if you look around, you'll notice that the chicken being pitched to you is often not "fried," but "crispy."

It's a basic rule of marketing-- when you're having trouble moving a product, change the language you're using to describe it. 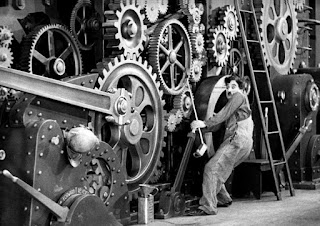 But over time, the metallic bloom dropped from the tin rose. The very machininess of automation began to remind us how inhuman it all was. The mindless repetition more often conjured up images of tiny humans lost as cogs in the great machinery. If something new, different, outside the rules appeared, automation does not know how to respond and it either chews up the anomaly or chews up itself. Rather than serve humans, automated systems demanded that humans adjust themselves to the machine, because automated systems could not exercise judgment or thought or wisdom or soul. We no longer welcomed the cold, hard, unbending embrace of the machine age; instead we were all inclined to rage against the machine.

But now we don't call it automation. We call it artificial intelligence.

As Alexis Madrigal reminds us in the Atlantic, "Google and Facebook Failed Us" yet again during the Law Vegas shootings because their news coverage is not handled by human beings, but by automation. They call it artificial intelligence because it sounds better, but its just a set of algorithms, a set of rules, a set of tasks to be performed over and over etc again, and when faced with unique circumstances that do not fit the rules, the automation screws up. For a while, junk news from the very fringes of intelligent thought popped up at the top of the feeds (that's why, for instance, so many people "heard" that the shooter was ISIS).


Want to put your child in an automated classroom? An automated classroom, complete with automated teaching machines, sounded pretty cool at one time. But the inhumanity, the requirement of students to adapt to the system. the system's inability to deal with human variables, an environment that runs on one set of unbending rules-- that does not sound cool.

And yet, in all but the rarest of cases, it's simply automation with a different name. A computer may allow for a faster, more complicated set of rules, but it's still just a machine following pre-set rules rules over and over to the twelfth power. We've digitized the metal bars, and we've hidden the tool marks of the men who built the machine, but it's still just a machine, chugging away. It's still the same weak teaching machine idea that has been promised as an educational game changer for decades.

It's still just automation. And your crispy chicken is still fried and unhealthy.
Posted by Peter Greene at Tuesday, October 03, 2017