Jeanne Allen is sad, because of the new documentary "Backpack Full of Cash."

Allen is the head honcho of the Center for Education Reform, a group that is very vocal in their opposition to teachers unions and public school, and very vocal in their desire to see choice and charters happen, no matter what. Allen frequently employs her snarky tone in defense of causes that even other reformsters find hard to defend, such as cyber-schools and Donald Trump (her explanation, which explains much, is that Mike Pence and Kellyanne Conway made her feel better about the Donald). She's also the lady who tried to teach John Oliver a lesson.

So it's hard to understand exactly why she's grumpy about being featured in "Backpack Full of Cash" as a woman who is strongly pro-charter. The problem seems to be that the movie itself is not very pro-charter at all, and the indignity is doubled because it's Allen's own quote that lends the film its title. A quote that she still stands by, because it's strapping a backpack full of cash onto each student that makes her world go around. 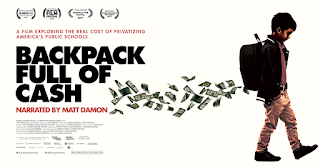 But Jeanne Allen is going on the offensive, which as usual involves issuing a bunch of press releases quoting Jeanne Allen, against that Matt Damon movie (while it is exciting that this movie was made and is out there being seen, it is depressing to note that it might well have sunk without a trace if Famous Actor Guy Damon were not attached as the narrator, because we can only ever have conversations about education in this country when actors or comedians or politicians or academics do the talking which only makes sense because who else would we listen to-- teachers?? Oh well-- I don't fault the film makers their choice because if you want your work to be seen you have to do what you have to do... but I digress).

Allen is also trying to leverage the Damon name by scolding him publicly for the involvement in this film that dares to quote her directly, including an #EducateMattDamon hashtag that so far has been used just by Allen and the CER and a few pro-public education wags (feel free to head over to twitter and help out). She grouped five of them together under an inflammatory headline, "New Matt Damon Movie Maligns Poor Parents"

As always, the Allen press release comes with an Allen quote:

It was a shock to see them cunningly and deliberately cut my quote to serve their own purpose. We always have to fight people who are, frankly, uneducated about the issue. If I could show Matt Damon what we actually do, and the options kids can have so they don’t have to go to failing schools, he’d be a supporter.

It has all the Allen standards. Some emotionally charged words ("cunning") to support her suggestion that all her enemies are acting out of malice, because in Allen's world, the only people who disagree with her are evil, bad people. Oh, and ignorant ones, because if people understood the issues, they would side with her. Including Damon, who's grasp of the issues seems rather deep and long-standing (I suggest a visit to the BustED Pencils site for a stroll through the many great interviews with Damon's teacher mom).

But that's okay-- Allen is going to educate him with five lessons.

Her link is to a paywalled WSJ article, but her assertion is meaningless. It's like saying "The plants in my field grow taller than the plants in Pat's field, so my field must be better." Without knowing what plants we're talking about, it's a meaningless statement. And since we're know about NYC charter tendency to skim and cream, it's suspect as well. And, of course, "academic growth" really means "scores on single narrow standardized test" which is a lousy point of comparison unless you think the point of sending your child to school is to get their test scores up.

2) Charters are a vital tool for low-income and minority families.

Allen here links to an op-ed asserting that supporting black colleges helps charter schools, so how that fits her point is not clear. On the other hand, we could link to five years worth of articles about how charter schools have increased segregation, and, in areas like North Carolina, have created a new version of white flight where white families flee to mostly-white charter schools, leaving everyone else in increasingly underfunded (thanks to charters) public schools.It's unfortunate, because in some parallel universe where charter schools are not meant primarily to serve the interests of "entrepreneurs" who are motivated by chasing backpacks full of cash strapped to students-- in THAT universe, charters could be useful. In this universe, charters are not a tool for low-income and minority families.

3) Listen to why these students chose their charter school.

Allen replays some greatest hits from her bounty-offering contest to spank John Oliver. Boy, wouldn't it be an interesting world if public schools could wave around $100K and say, "Whoever says the nicest things about us gets this!"

4) Give parents real power in their child's education.

Nope. Simply not true. First, communities have to give up any sort of representative control of the school and replace it with a board of directors that does not have to answer to them. Then they have to give up any ability to see how the charter school is spending tax dollars. And then they have to wait and see whether the charter school is willing to accept and serve their child. The charter deal is that parents must give up what little power they have and hope they get something worthwhile in return. Travel to Florida for an example of how bad a deal that turns out to be for many parents.

Seriously. Allen's point here seems to be that sometimes celebrities and sports stars back charter schools. That his been true since the years it became obvious that a charter school would make for both good PR and good ROI, but it has not worked out very well very often. For example, Deion Sanders' attempt was a spectacular disaster.

Wait! Where was the maligning??

Nowhere. Allen doesn't even attempt to back up the main accusation of her title. Nor does she ever address the subheading of the film-- "the real cost of privatizing America's pubic schools." She's not trying to make a point-- just fling some mud and hope it sticks somewhere. You would think that a chief of a big budget advocacy group would shoot for a higher bar than, say, a blogger.

So let me suggest that you track down a screening of this award-winning documentary and see for yourself if Allen has been herself maligned, or if she is in fact a fine exemplar of the sort of folks pushing the privatization of one of our oldest democratic public institutions.


Posted by Peter Greene at Wednesday, October 18, 2017
Email ThisBlogThis!Share to TwitterShare to FacebookShare to Pinterest