Gates Shifts Gears Again (And Claims To Have Learned Things)

Today in Cleveland, wealthy education amateur Bill Gates announced that he and Melinda are about to drop another $1.7 Billion-with-a-B on education-- but in new and more exciting ways, because Bill Gates has definitely Learned Things.  The announcement came as a speech in front of the Council of Great City Schools, and it came in several distinct parts.

Gates rings the usual low scoring bells, though he has the nuance to note that our wealthy white students are actually kicking ass on the OECD test , and our not-wealthy, not-white, not so much. I'm not going to run down that rabbit hole to check his figures, because they don't really matter. Gates has been playing with schools for seventeen years because Gates personally thinks schools ought to work differently.

Next, Gates recapped his history as an education-flavored philanthropist, nodding vaguely in the direction of Things He Has Learned in those seventeen whole years. Remember all his greatest hits? 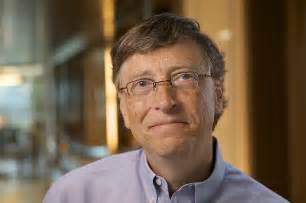 There was the small schools movement, where Gates was going to throw money at the creation of smaller schools:

When we first got involved in U.S. education, we thought smaller schools were the way to increase high school graduation and college-readiness rates. In some places and in some ways, small schools worked.

In other words, that didn't work .

So then they switched their attention to fixing teachers and playing with merit pay. Gates doesn't mention the disaster in Florida, but mentions some other big cities plus Tennessee where they've seen "promising" results.  So again, he's going to call it a success even as he lists the reasons it didn't succeed (local contexts and the fact that there are other important drivers beyond teacher quality).

And then Common Core, the results of which he finds "exciting" but there's still more to do.

So what did he learn from the last seventeen years?

Well, nothing, actually. This has been the Gates pattern-- what looks like it will take the form of admission of failure or at least a serious mistake turns out to be an admission that he basically had it right and he just needs to tweak a few things. So after talking to some folks, here are the things he learned:

* Teachers need better professional development and curricula aligned with the Common Core. That loud crack you just heard is the sound of a million teachers smacking themselves in the forehead. Yes, after all this, Gates thinks our problem is that schools and teachers have not given up enough of their autonomy to the wildly unpopular, still unproven standards.

* "Schools that track indicators of student progress — like test scores, attendance, suspensions, and grades and credit accumulation – improved high school graduation and college success rates."  In other words, Gates is now convinced that weighing the pig does, in fact, cause it to grow. Crack!!

* Schools are the "unit of change." Each has its own challenges-- and he underlines social and emotional stuff-- but their solutions need to be aligned to l;ocal concerns.

So what is he doing next?

First, no more money to be spent on teacher evaluation (though they'll keep watching the data).

Third, they are doubling down on curriculum and PD development to be aligned to the Core.

Fourth, they will keep spending money on charter schools. But since the charter school biz is glutted with money from rich folks, Gates will focus on developing stuff for students with special needs.

And finally, a bunch of money thrown at developing "innovative research to accelerate progress for underserved students." Which could mean any number of things, including cyberized learning in the new CBE mode.

Gates mentions some highlights of Great and Exciting Things going on right now. You may not agree with his assessment.

Fresno set up a system to let students know they could go to college. That seems like a much more harmless innovation than his next item, which is the Zuckerberg Summit Computerized School in a Box, his terrible competency-based education idea. And in Chicago, while they may be cutting programs and student support like crazy, they are really great at weighing the pig (if you weigh the pig enough, can you skip feeding it?).

Better still, there are school networks popping up all over, and nothing makes local schools better than an additional layer of bureaucracy whose main function is to land and administer grants. Seriously-- most of this is in line with the usual Gates priorities of charters and Common Core and computerized education-like programming, but I don't quite see why he wants to push networking, unless it is to facilitate the networking of computer-delivered ed-product.

Our goal is to work with the field to ensure that five years from now, teachers at every grade level in secondary schools have access to high-quality, aligned curriculum choices in English and math, as well as science curricula based on the Next Generation Science Standards. In a few places, we also will support pilots of scalable professional development supports anchored in high quality curriculum.

That's the dream. And if you have any doubts about how far divorced from reality the vision is, Gates offers DC and Louisiana as examples of places that really Get It.

Gates promises to spend 25% of his stack o'cash on "big bets," and charters get 15%. Also, heavy push for math and preparing "students for the dramatic changes underway in the workforce."

Your Gatesian moment of irony

This seems to be a Bill Gates requirement-- a moment of blissfully self-unaware irony. Here, we get this quote:

Giving schools and districts more flexibility is more likely to lead to solutions that fit the needs of local communities and are potentially replicable elsewhere.

Flexibility-- just as long as the teachers, school, and curricula are more tightly aligned with the Common Core. It is a fine successor to Henry Ford's "any color you want as long as it's black" edict.


Lots of folks are going to pick this apart in the days ahead, and there are some differences here. I'm delighted to see Gates get out of the teacher evaluation business; less delighted to see him double down on Common Core, charters, and the hints of more computerized privatized standardized education-flavored products.

So there's a slight shift of direction, but one thing stays the same-- the Gates conviction that he can serve as an unelected, unexperienced tsar of American education, reworking education to his will by sheer force of money. After seventeen years, he still hasn't noticed that he isn't helping.


Posted by Peter Greene at Thursday, October 19, 2017
Email ThisBlogThis!Share to TwitterShare to FacebookShare to Pinterest