Full disclosure-- I made the number 6.3 out of the air, because frankly I've lost track of the various versions of ed reform that we've seen. But we're definitely on to something new.

The new ed reform has staked out a position against bureaucracy and paperwork. This conversation starts with a Rick Hess piece, which becomes a thing because Betsy DeVos decided to quote it in her address to charteristas. And so we arrive at a call for reformsters to stand up against reformocracy.

The call for getting rid of bureaucracy is not without disagreement. Checker Finn pushed back hard, and Mike Petrilli chimed in. But there continues to be a buzz surrounding the issue of accountability/bureaucracy. The most recent entry in the discussion is on the Fordham website, written by Max Eden of the Manhattan Insititute, defending the book project that Finn attacked. 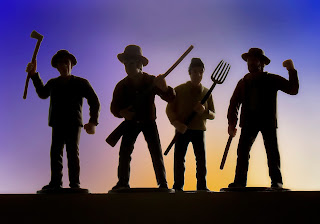 The piece highlights some of the important features of v 6.3 reforminess. "Results: Yes. Regulation: No. How to beat back the new education establishment" is a rather mixed-up manifesto.

One of the curious features of current reforminess is the complete brain-wipe when it comes to Common Core State [sic] Standards. Reformers led the charge to inflict a set of national standards on every state and every public school district, and I'm happy that CCSS is more ghost-like these days, but it's mighty disingenuous for Core supporters to pretend that it's just awful how someone somehow created a mighty web of regulations and paperwork and bureaucratic hoop-jumping to make sure that the Core was properly implemented. This selective amnesia occurs periodically in the reform movement. Reformsters were shocked that the Big Standardized Test narrowed curriculum and warped education, after they worked hard to create a test-based accountability system. Reformsters used political tricks and tools to install their various policy ideas, and then complained that education discussions had become too political.

Eden quotes the old saw that charters trade autonomy for accountability, a red flag all by itself because A) if that's the secret, then lets fight for more autonomy for public schools and B) charters have regularly and forcefully fought to avoid accountability as much as possible.

And then the flat-out falsehoods begin:

Unlike public schools, charter schools are accountable to parents (whose children they must enroll by choice), authorizers (which may choose to shut or not renew charters), and the state (which sets rules and regulations for authorizers). The debate over charter accountability is a question of emphasis among these actors.

Public schools operate transparently, run by elected boards. They are accountable to every taxpayer, including parents. The "unlike" is baloney.

But central here is Eden's definition of the issue of accountability-- balance between parents, authorizers and the state.

The “new education establishment” wants to shift the locus away from parents and authorizers, and to the state, by passing laws that prescribe and circumscribe the work of authorizers.

He identifies  National Association of Charter School Authorizers as an example of this group, with a published call for such prescriptions. Eden says that their calls for uniform authorizer standards and student achievement requirements should make sense, but don't seem to make any difference-- as always, the measure of effectiveness used here is test scores, which remains a terrible choice, like judging food quality based only on color. But he worries that the cost is greater:

As Tulane professor Doug Harris says, there hasn’t “been as much actual innovation as maybe the original charter folks hoped…when you have intense test based accountability it really restricts what you can do and to what degree you can innovate because…there are only so many ways to make test scores go up.”

First, I've got another explanation for the absence of any charter-ignited wildfire of innovation-- charter operators (who are largely education amateurs) don't know anything innovative and have leaned heavily on old non-innovative solutions of controlling the quality of the student body. But Eden does note the other obvious implication of the quote-- that depending on test scores as a measure does mall sorts of damage to the whole educational model.

This does not lead him to conclude that maybe we should ditch the whole test-centered model for all schools. Instead, it leads him to conclude that  "authorizers ought to retain autonomy to open and closer charters based on their own human judgment." Here he again glosses over some realities, including states where authorizers have a financial interest in keeping charters open, or the more common situation where it's much harder for authorizers to close a charter than -- well, than it is for public schools to fire a tenured teacher.

Eden says that then book calls not for ditching state-based accountability entirely (just mostly) but leaning on authorizers and parents. In particular, he says this:

If these defenses all sound familiar-- don't tie our hands with bureaucratic red tape, don't enforce unfair standardization, don't judge us on Big Standardized Test results-- it's because this was what public school supporters back when charteristas were trying to clear the ground to make room for their babies. One of the large, consistent shifts in ed reform has been from "We should use these pickaxes on public schools to test their worthiness" to "It's not right to use these pickaxes on charter schools."

It should be noted that some reformsters have been pretty consistent and intellectually honest over the last decade (Rick Hess among them). And some reformsters have been pretty adamant about holding the accountability line (see above-referenced Chester Finn piece). While it's tempting to attribute the pickaxial shift to self-serving hypocrisy, it's also true that the charter industry has been largely run by educational amateurs, leading to same sort of revelations that Trump has experienced in the White House (Hey, this is harder than I thought).

If public education supporters seem a little touchy about reform's new opposition to bureaucracy and paperwork and red tape and test-centered evaluation, it's because we could have used all this outrage and resistance back when reformers were on the other side of the p0ush. It's like reformers whipped up a mob against schools, set the mob on public schools, then, after the public schools were weakened and charters were built, stood up and hollered, "Hey, you mob! You should knock it off and go home."

Eden winds up his argument by saying that accountability isn't a binary thing-- you could be all for it, all against it, or just trying to walk a line somewhere down the middle. But even Eden's "nuanced" view of accountability oversimplifies the questions of accountability. To whom? For what? With what consequences for coming up short?

Those are all important accountability question to ask (just in case you've been confused by reformster rhetoric, let me be clear that I, a union public school teachers, am absolutely in favor of accountability). But Eden doesn't really seem to be exploring the realm issues of accountability so much as he's looking at a way to make it hard to close charters without actively arguing against accountability. So we have the new reformster stance for accountability lite-- of course we want accountability for charter schools, but here's a long list of the ways in which we don't want it. Enough accountability to keep critics happy, but not so much that it actually gets in our way.


Posted by Peter Greene at Friday, June 30, 2017
Email ThisBlogThis!Share to TwitterShare to FacebookShare to Pinterest