The cliché is a fifty-year-old asking some ten year old student for help in making the computer work. Having trouble making working with your device or your software? Just grab one of those digital natives to handle it for you!

Well, not so fast. Here's Jenny Abamu at Edsurge saying what I've been arguing for over a decade-- our digital natives are hugely naïve about technology.

With the adoption of any new technology, there's a curve. In the 1910s, if you owned an automobile, you were also a reasonably savvy mechanic who knew how to work on his own machine. But in the century since, cars have become advanced in a way that has led to fewer and fewer car owners who could actually repair their own vehicle. 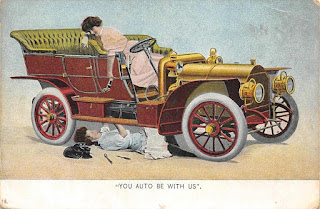 It's a simple fact of marketing-- early adopters may be willing to know the nuts and bolts of the tech, but to expand my market, I have to be able to say to non-savvy buyer, "Don't worry-- the tech will take care of everything for you." I have to make the tech user-friendly, and the friendlier it is, the less my customers need to know. The goal is to move from a product that only an aficionado can handle to a product that any dope can use. We are well into Any Dope territory with computer tech (spoiler alert: Linux is not the PC wave of the future).

Fifteen to twenty years ago, I could count on a few students in each class who could code. I used student helpers to build the school website from scratch. But nowadays I have to explain to my students how to save a photo the like on line, or how to use a Google doc. And students at the New Media Consortium Summer Conference echo that:

“Something you can do to prep your students for college is to have one day where you host a workshop on using Google Docs,” suggested Alejandra Cervantes, a junior at UCLA, in response to a question from an educator about the best way to support high school students heading to college. “Something simple like that can be pretty instrumental in helping them succeed in classes in the future.”

And yes-- that quote and the article its from raise its own set of issues. Because Google is working hard to inject themselves into the ed world, and they're not doing it just to be great humanitarians, so pieces like the Edsurge piece are meant to keep banging the drum that your student must know how to use Brand X Software or she'll fail at life.

And yet there is all this cool stuff to use, and my students don't have a clue. They know Snapchat, Instagram, a little twitter, and whatever the hot app of the week is (developers who think they can come up with an educational app that students will use enthusiastically for a year, starting months from now-- those developers have a naivete problem of their own). There are pieces of software that let them collaborate on projects-- they don't know how to use any of them. There are tools for including art and images and videos in one project and they don't know how to use any of them. And why do we keep reading stories about somebody who lost a job or a college spot because they posted something stupid on line? Because the vast majority of my students have no idea how the interwebs actually work.

In some cases it is tunnel vision-- they just use what they use, which is what they picked up from friends or the pre-loaded software on their device. In many cases, it's lack of access. A Pew Research Report from 2015 says that 17.5% of households with children have no internet access. That does not seem out of line with my own student population (though virtually all of my students have their own smartphones).

I have beaten my head against this cyberwall for years. I was hugely excited about the possibilities of web-based projects in which students could take 15 or 20 different works of literature and show a web of relationships between them-- far more complex stuff than could be managed in a traditional paper. But when I gave them the assignment, what I got was a traditional linear paper with each paragraph on its own page, linked so that the reader could go forward or back a paragraph.

I am not a thoughtless technophile, and I never implement tech just to do it. If it's not useful, I don't care. Where it is useful (I have replaced the traditional English teacher keep-em-writing practice of a paper journal with mandatory blogging for my students), I embrace it. But I have had to train and explore and learn myself first, because my digital natives are like people who have grown up in a big metropolitan city but only know their way around their own two-block neighborhood and don't even know the actual names of the streets there.

If you want to get your students into the technofuture, you are going to have to lead them there, just like you have to with Shakespeare and critical realism and new vocabulary words. That's the implication of this kind of article for teachers. The implications for people who think giving standardized tests on over-the-net software-- well, that's another discussion (spoiler alert: it's a bad idea).