Back in the day, NEA leadership should have picked up a clue that they'd backed the wrong horse when they published this article in 2013. "10 Things You Should Know About the Common Core" included such notable observations as "Most NEA Members Support the Common Core," and while you might get a chuckle out of the rest of the list, the real harbinger is in the long, blistering comments section. The average NEA Today article does not exactly draw large or lively response, but this piece drew 325 rather angry comments asking what, exactly, that author was smoking. NEA was either ignorant of or deliberately trying to rope in the large number of anti-Core members.

The author was Tim Walker, and last week he offered a look at personalized learning, and once again NEA either doesn't get it or is trying to stick it to members. 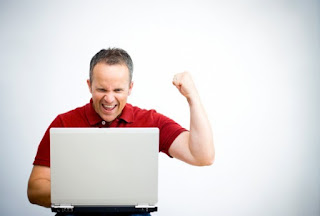 As with NEA support for the Core, Walker starts the article by implicitly accepting that current schools (you know-- the ones where NEA members work) pretty much suck. Too many students sitting in regimented rows memorizing things and listening to teacher lecture. It's a simplistic and reality-impaired view of what's actually going on in classrooms, and it raises more questions than it addresses (e.g. If the classrooms are too full, why aren't we calling for smaller classrooms? Also, if Common Core was going to fix exactly these problems, why aren't they fixed?) He visits a happy personalizing school at East Pennsboro Area Middle School in Enola, PA.

Best of all, the lifeless classroom setups are gone, and learning spaces have been reconfigured with moveable furniture and walls so that when classroom subjects overlap, teachers can combine lessons. Students rotate through these areas, which fosters a more collaborative learning space.

Because only with personalized learning could you accomplish these things? Somehow?

Walker does give a quick look at the dark side, visiting teacher Paul Barnwell, whose Language Arts class now gets their reading instruction from the canned ReadingPlus program:

His students begin each class period by logging onto the program. They remain there for 20 minutes while Barnwell makes himself available for any questions or troubleshooting. But usually he finds himself—at least during this part of the class—feeling slightly marginalized. On one hand, ReadingPlus seems to be working—some struggling students are catching up to grade level. Still, Barnwell can’t shake the one nagging question that is likely on the minds of many educators minds: What comes next?

Walker's point is that "personalized learning" has a lot of different meanings, but if you think he's going to look at what those different meanings tell us about the huge corporate money-seeking drivers behind the rise of personalized learning-- well, not so much. He notes that PL is a rejection of the notion of fixed seat time, which is a fair characterization, then shifts unannounced to the idea that it is student-directed learning, which is not a fair characterization at all. But Walker quotes the National Education Technology Plan issued in 2010 which says that PL puts “students at the center and empowers them to take control of their own learning by providing flexibility on several dimensions.” This manner of framing personalized learning is a bit of a red flag because this "student-centered" (and institution degrading) model is a rhetorical favorite of Betsy DeVos.

Walker lets us know that there are big forces behind personalized learning, Zuckerberg-sized forces, though Walker offers a Zuckerberg quote that is reminiscent of Bill Gates in his Common Core salad days:

And Walker shows us a bad case scenario with Carpe Diem Collegiate High School and Middle School, a charter school in Yuma, AZ that uses the corporate cubicle model. But as he does throughout the piece, Walker shows the contrary side only so he can reassure us that things aren't really that bad.

And then Walker ends the piece by circling back to the folks at East Pennsboro, using the last third of the article to talk about how awesome their experience has been, putting heavy emphasis on how their model is teacher-led, student-centered, and without so much as mentioning a software vendor benefiting. Nor mentioning any drawbacks or issues.

There's a way to construct an article so that it looks fair and balanced. Let's consider the controversial issue of cheese-straightening. Here's my pitch outline:

1) Open with vignette about successful, happy cheese-straighteners, then after creating the happy picture, note that some have misgivings.

2) Here are some concerns (though they could be nothing). Here's a critic (though his concerns are with little solid basis).

3) Here are some of the powerful drivers behind cheese-straightening (hard to resist).

5) Let's go back to that happy picture and all the magical-- really, just magical-- details that go with it.

Missing most of all-- the question of whether or not we should even be doing this. It is again reminiscent of NEA's Common Core stance under Dennis Van Roekel, which was "What is the alternative? What do you want?" In other words, "Of course we have to do this. That's a given, because we have terrible problems and this is a solution."

The several moments of Common Core nostalgia fit. I have the same sour feeling reading this piece that I had back when DVR and Tim Walker were telling us that Common Core was super duper. What I want from my union, from my professional association, is someone who will stand up for me, for my professional brethren and sistern and call threats to public education by their name. There are important, serious, even critical conversations to be had about personalized learning, and US teachers ought to be involved in those discussions. This piece, unfortunately, shows NEA trying to postpone and avoid the conversation instead of leading it. Feel free to stop by the website and add to another robust comments section.

Posted by Peter Greene at Monday, June 12, 2017
Email ThisBlogThis!Share to TwitterShare to FacebookShare to Pinterest