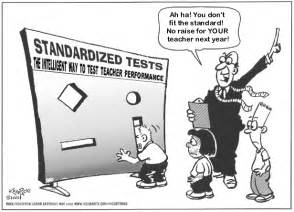 Meer takes a moment to attack the traditional steps and lanes payment system. Advanced degrees and years of experience, she says, do not make teachers any better. And by "better" we mean "correlated to higher student scores on a narrow, invalid Big Standardized Test." That's pretty much the only way we could hope to make the absurd argument that neither additional education nor years of experience make teachers any better at our jobs.

That argument poorly made, Meer is on to her main point. Why is there no model, no "playbook" for PBC in the teaching world. Meer says that's because in all versions, there are winners and losers. She has three possible versions of PBC

1) Stick with a traditional “step and lanes” system, but teachers only move up a step if they meet a minimum specified level of performance

Nobody gets a raise unless she makes her numbers; "ineffective" teachers would stay stalled on a single step for years, just like all of the teachers in places like North Carolina. Meer says that winners would be programs that benefitted from  the "freed up" money saved  by all the people not getting raises.

There are two problems with that. One is that money would be "freed up" which h is an idea carried over from industry, where merit pay systems are based on the amount of money that the business made in that year. That is not how public school systems work-- we do not have an annual "profit" to divvy up.

Second, the system assumes, as do all PBC systems, that there is a bunch of Bad Teachers out there that we will just root out and pay less money. After years of various evaluation systems that keep saying that 98% of teachers bare just fine, reformers are wedded to the theory that the results prove that the evaluation systems are messed up, and not that most teachers are just fine.

Meer says the losers here are the high-performing teachers who wouldn't get the Big Bucks because the well-reviewed crappy teachers would be glomming up all the money. Which highlights another problem with PBC systems-- the amount of merit pay would be based not on actual quality, but on the amount of money the district budgeted for teacher pay. I've read many merit-based policy ideas and not one has ever said, "And at this point, if it turns out that the district has a plethora of great teachers, they'll just have to raise taxes to meet the merit payroll."

2. Earn one-time incentives such as bonuses

As a teacher, you basically take a cut in your base pay so that you might one year get a one-time lump sum. Meer says the winners would be teachers who actually get the bonuses, "especially teachers who find particular meaning and recognition in one-time 'gifts.'" and I do not even know what that means. Somewhere there are teachers who say, "I don't want a dependable, predictable salary. Just surprise me with a wad of cash every several years. My family will take 'surprise' vacations."

And Meer acknowledges that if districts go cheap with these bonuses, they won't actually motivate anybody to do anything like, say, stick around in a district with crappy pay.

3. Adjust base salary based on performance

Meer notes that this system is supported by people who feel they'll beat it, and opposed by people who think it will beat them. She even acknowledges that this confidence may be rooted in faith in the system, not just teacherly self-confidence. Her language acknowledges another issue with PBC-- that such a system is built to measure a teacher's built-in awesomeness, assuming that such a quality is a solid state hard-wired feature of each educator, and not a quality that ebbs and flows over decades.

Discussions about performance-based compensation are hard because there will be winners and losers with any approach, and defining high and low performance can be challenging and controversial 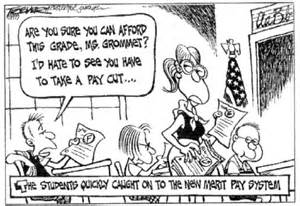 It's a start to admit that any PBC system must have winners and losers, but it skips over the question of why we need a system with winners and losers. There are all sorts of assumptions embedded here, from flushing out the Secret Society of Terrible Teachers noted above to the Motivate the Lazy fallacy-- the notion that teachers could be teaching students well, but just don't bother because we haven't been sufficiently bribed or threatened. This is not only hugely insulting (Yes, I could teach the children better in this profession that I've made my life's work, but I choose not to just to be a dick) but it reveals a profound lack of understanding of what a classroom is like. Teaching badly is hard-- it's exhausting and stressful and the students will punish us much more in that moment than any reformster ever dreamed of.

But even if the perfect plan is elusive,  a “works for us” compensation approach doesn’t have to be, whether it’s a variation of one of the categories above or another creative approach.

Yes, actually, it does have to be. Because the biggest weak point of all of these systems, beyond the funding of them or the insulting nature of them or the tendency to turn colleagues against each other as they fight for that money or even the dishonesty behind systems that aren't about paying more for the best as much as they're about finding ways to pay less for average teachers-- beyond all of that is the problem of measuring teacher performance.

We have no reliable, valid, tested, proven method of definitively distinguishing good teachers from mediocre teachers. And we must choose the method carefully, not merely because of justice and fairness, but because of what that system will do to the work of the school.

We have ample evidence of what happens when you tie the definition of "effective" to the scores on a crappy standardized test-- education is re-organized around teaching to that test. And nobody-- nobody-- has jumped up in the last decade to say, "This is working awesome!"

A performance based compensation system is another way to tell your staff, "This-- and just this-- is what we're paying you for. This is what matters." So before you install any such system, you'd better be damned sure that you have c hosen well. Otherwise all you're doing is installing a system of perverse incentives. So no-- a "works for us" or "good enough" or "close enough for jazz" system is not easy or okay.

The obstacles to all PBC systems are many, and largely unacknowledged by the people pushing them. Meer has scratched the surface.


Posted by Peter Greene at Sunday, June 25, 2017
Email ThisBlogThis!Share to TwitterShare to FacebookShare to Pinterest