The Dem Platform, Randi, and Charters

The Democratic platform committee has been working away all weekend, reportedly till well past midnight. We've been fortunate to have some public education advocates there as part of the education committee, including Chuck Pascal and Troy LaRiviere.

Twitter had a little bit of a eruption today over what was finally submitted to the main platform committee regarding charter schools. The whole business is pretty brief and can be found on this gigantic slice of C-Span at about the 31:00 mark. But I've watched it, and if you don't want to, you don't have to.

Chuck Pascal (from Pittsburgh, just up the road from me, so woo-hoo) went to committee armed with many amendments, and this was one of them. He's listed as the sponsor.

First-- here's the original draft language, with additions in blue:

(Let's just set aside for a moment the issue of the omitted Oxford comma in the amendment.) 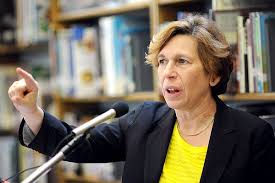 Next, Randi Weingarten steps up to speak in support of the amendment. She's delighted that the education section started with a unity amendment and will now end with one. And then she yells a bunch, because that's Randi. Democrats should be for high quality schools regardless of zip codes (and fierce finger pointing-- she must have some serious guns) and regardless of economic status. She says that there's a place for public charter schools (which puzzles me, because ALL charter schools claim to be public but virtually NONE of them actually are), but not for things like Detroit where Big Bads like the Devos family and the Kochs are using charter schools to kill off public schools. She winds down with blah blah blah level playing field blah blah good schools for parents to send  children, teachers to work students to learn blah and so here's the amendment.

So how'd she do? There's still a lot of charter love in Randi's speech, and with the exception of her use of  "democratically-elected" there's not much she said about the amendment that she couldn't have said about the original rotten language. But she and this amendment do make a new kind of distinction-- that when charters disrupt and displace traditional public schools, that's a Bad Thing. Which is a remarkably direct challenge to the modern charter model, which says that disruption and displacement of the public school system is the goal. It's the closest I think I've heard a national union leader get to saying, "The goals of charter proponents are bad, destructive, wrong goals." So I'm happy for that.

Now if she wants to take her pointed attack on Detroit a step further and also challenge what's being done in New York and Connecticut and say things like "What happened in New Orleans after Katrina should never have been allowed to happen," then we'd really have something.

But to original platform definition of Bad Charter was just "a for-profit charter" which seriously overlooked the point that non-profit charters are just as bad (and profitable) as the for-profits. This new language defines a Bad Charter as one that does not have democratically-elected governance, does not serve the exact same population as the the local public school, and that destabilizes or damages the health of that local public school."

In other words, the new language offers a much broader understanding of when a charter school is Not Okay than the draft did.

Sure, there are some of us who would like to see Bad Charter defined as Any Charter At All-- but that blanket condemnation just brings us back to supporters saying, "Well, why? What's wrong with charters." I would much rather, you will excuse the expression, hold them to some specific high standards, and this language, while not perfect, does that.

But there are two more speakers. One is a very nice lady who wants to point out that she's proud of her party and that charters don't take care of children properly and I think she means well but doesn't necessarily understand the choreography of these sorts of gatherings.

Then Chuck Pascal himself steps up and puts emphasis back on the ways in which this new language makes demands of charter operators.

And then the language is passed and we're moving on.

Is it perfect? No. Is it better? Yes. Does it call out the full frontal assault of charter schools on traditional public education and demand that the assault stop? No, it doesn't-- and neither will Hillary Clinton, ever. Will this document make the slightest bit of difference a year from now? No, no, it won't. It's amendment by addition, which means everybody can still point to the parts they like and ignore the parts they don't.

I look forward to hearing from Pascal and LaRiviere what it took to get even this small shift in the party platform's direction-- Pascal says his other amendments were adopted without change, but this one took some negotiating. I can't imagine it was easy. I would count it as a small win, a baby step forward, a shift in a better direction. We've got language on the table that gives a broad definition of Bad Chartering, a definition that encompasses most of the charters out there, which is a hell of a lot better than the bogus "for profit" distinction. Advocates for public education showed up, made some noise, and got the establishment to budge, even if the establishment may not get how they budged, even if establishment intends to keep trundling along as if they never budged at all.

Come November, public education is still screwed-- but at least for one moment, we got the Democratic Party to sort of pay attention to real, substantive criticism of charter schools. "It could have been worse" is not a phrase I live by, but still, this could have been worse, and in this election cycle, I think that's as good as it's ever going to get. But sucking less and not sucking at all are still two different things.

Posted by Peter Greene at Sunday, July 10, 2016
Email ThisBlogThis!Share to TwitterShare to FacebookShare to Pinterest