Free market fans envision a story something like this:

Finding themselves in a world where the power of the free market is unleashed, charters, private, and public schools all become transparent, competing with each other to be able to publish the finest student outcomes. Empowered consumers/parents study up on the student outcomes published by each school so that they can weigh the merits of each school and make the best selection for their children.

If this fairy tale ever came to pass, education would be the first sector of the free market to ever function in this fashion. Go turn on your television right now and wait for an advertisement that is a factual, data-based account of the effectiveness of the product. Wait for an advertisement that does not try to imbue the product with a personality or identity, even if products corn flakes and cleaning fluids do not naturally display any personality traits. Okay-- you shouldn't actually wait for any of that, because you will get old and die before you actually succeed.

Let me repeat what is perhaps my most-repeated observation on this blog.

Now we have an academic study from the National Center for the Study of Privatization in Education at the Teachers College of Columbia University. "Perceptions of Prestige: A Comparative Analysis of School Online Media Marketing," by Sarah Butler Jessen (Bowdoin College) and Catherine DiMartino (Hofstra University) is a working paper that looks at how marketing plays out in a couple of education markets.

The paper is about setting up a framework for comparing branding and marketing practices, comparing the practices of different types of schools in "choice settings."

Jessen and DiMartino draw on lots of literature studying the use and practices of branding and marketing in the world at large (because, as everyone with eyeballs has noticed, that's what actual free markets are loaded with) as well as education-specific material. Since choice systems have required schools to distinguish themselves in order to win customers, some researchers have already started looking at how that is done. Branding communities, for instance, build a whole culture around a school mascot and school logo.

Researchers have found that shared personal values and life experiences–usually gleaned from personal interactions and word-of-mouth recommendations—attract parents to particular schools rather than the actual academic performance of the school.

In other words, families are inclined to send their children to schools serving families much like their own-- one more reason that choice is likely to make segregation worse rather than better. Jessen and DiMartino also note that "proximity to home and after-school opportunities" are big draws for choosing schools.

Jessen and DiMartino note that research (going all the way back to 2002) shows that choice systems combined with test-driven accountability lead to schools that market precisely toward "better" students who will improve the school's numbers (and market to discourage those who would lower the school's performance profile). The push for slick, glossy marketing also drains resources, or leaves public schools unable to compete in the marketing arms race. The call for marketing also changes the role of the school administration, which now needs to be concerned not just with the usual in-house issues of running a school, but must also worry about marketing and "image management."

But what would that marketing actually look like? Jessen and DiMartino shift here to the world of business.

Research from that world suggests that for "experience" goods (those for which the quality has to be experienced to be believed) advertising and marketing are about finding ways to signal quality. A common and effective way to signal quality is pretty simple-- spend a lot of money on the ads. Make sure they are slick, shiny, and polished. Then make sure that the customer encounters them often. Examples of this principle in action are everywhere. How do consumers "know" that Coke and Pepsi are classier and higher-quality than, say, RC or Faygo? After all, we're talking about carbonated, artificially flavored water-- quality is not really an issue. Yet we see Coke and Pepsi ads constantly, and always featuring high-gloss slick production values, and so somehow we "know" that Coke and Pepsi are the highest-quality carbonated artificially-flavored water out there.

Those kinds of signifiers of quality are definitely "suboptimal information," but even more likely to come into play with education because not only is an experienced good, but the people who actually experience it may not be ready to evaluate it for years afterwards (most teachers have a story about a returning student who says, "Yeah, years and years ago when I had you in class, I hated it. But now I'd just like to thank you, because I finally see the benefit of what you did"). On top of that, the person doing the selection-- the parent-- isn't even the person who is going to experience the good.

All of which means that the parents are susceptible to marketing and branding.

So, now the part where the actual studying was done.

Jessen and DiMartino looked at New York and Boston. They selected urban and suburban schools, divided into CMO (chain) charters, Non-CMO (individual stand-alone mom and pop) charters, public (non-charter) schools of choice, public schools, and private schools. Finding communities that included all five types turned out to be a challenge-- CMO charters were mostly not in the suburbs, and urban areas were short on public schools, and that's worth a bunch of consideration all by itself, but let's move on.

Jessen and DiMartino considered the school web site, the school's YouTube presence, and any activity on social media (Facebook and Twitter). And they threw in some analysis of published mission statements for good measure.

There was big data to be wrung from the school websites. Here's a handy chart from the paper (used with permission): 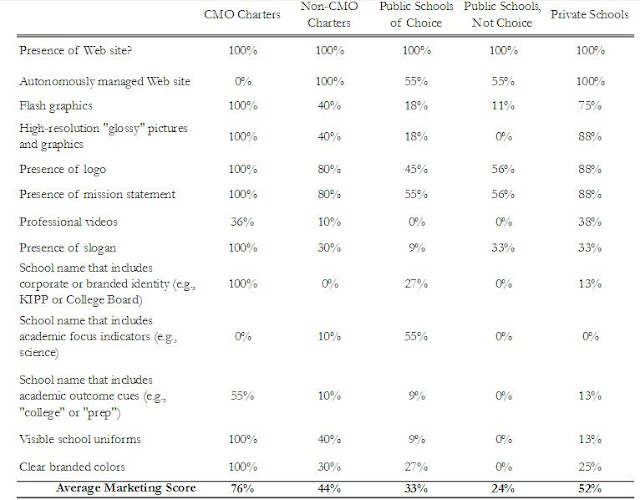 The "autonomous web site" 0% for CMO charters comes from the CMO habit of embedding all individual schools in the chain in the mother ship's website. If you're going to maintain the integrity of the brand, can't run the risk of individual schools going off-message.

As a Firefox user, I'm not sure that flash graphics qualify as a Good Thing; nevertheless, you can see the overall pattern. Charter chains do a great deal of well-managed marketing of their brand, much of which has absolutely nothing to do with how good a job they do at providing an actual education to students.

Jessen and DiMartino also break down the language of mission statements, which yields it own interesting data set. CMOs overwhelmingly favor academic language, followed by a bit of character, while the other four school categories include academics, but also used a great deal of language related to character and community (for CMOs, "community" doesn't make the cut at all). Only public schools brought up citizenship.

When it comes to YouTube, CMOs are also smoking everyone else. 91% of CMOs had their own YouTube channel (82% with carefully branded colors), and 73% had channels with professionally created videos. Even private schools were far behind this (50% with channels, 13% with pro videos). Public (non-choice) schools are just sad-- only 11% had a YouTube channel, and nobody had pro videos (presumably nothing but videos from band concerts and football games taken by somebody's mom).

Curiously, while CMOs lead the pack when it comes to Twitter, almost every type of school is catching on Facebook (CMOs, 100% and public non-choice schools, 77%). This perhaps confirms independent research from my classroom, where a very loosely researched study resulted in the finding "Dayum, Mr. Greene. Nobody uses Facebook any more. Facebook is for your mom." It should also be noted that while almost everyone is on Twitter, not everyone knows what to do there, with CMOs way ahead of the pack in followers and in the use of hashtags to mobilize their people.

So what conclusions can we draw?

Jessen and DiMartino note that some high-powered public schools in wealthy communities may not market much because their reputation is plenty effective. And I would add that there's still a non-zero portion of the public school sector that is leery of all forms of social media because of student privacy issues.

Nevertheless, many of the charters, particularly the charter chains, are marketing, and marketing hard. The writers note that Success Academy's YouTube channel has at least 131 videos, most professionally produced. That's not cheap. But then, by looking through old tax forms, the writers also found that Success Academy spent $700,000 on PR firms in just one year, as well as $418,718 to Mission Control Inc., a direct mailing firm that has also worked for NY Governor Andrew Cuomo and the House Majority PAC. Plus printing fliers, buying mailing lists, etc etc etc. And you can bet that none of this is being done by some principal's secretary in the gap between submitting the daily attendance report and checking lunch money lists. What's the takeaway here?

Schools with more money invested in their Web sites, their promotional videos, and their social media outlets stand to be perceived as being of higher quality by parents, students, and investors alike. CMO-run charter schools present a much more professional face in these online media outlets than other schools in the public sector. CMO Web sites are matched for sophistication and polish only by elite private schools, but with very different messaging. Such investment in marketing raises anew fundamental questions about the perception and reality of public education.

Second, that's a whole pile of financial resources being spent on marketing instead of being spent on educating students. And while some of those charters may well benefit from the largesse of investors, mostly we're talking about advertising paid for with taxpayer education dollars. The state said, "Hand over some of your money so that we can educate the citizens of tomorrow" and then then charters turned around and spent that money on a professional photographer to take pictures to go in the glossy brochure packed in envelopes and mailed out by a professional direct-mailing firm-- all of it paid for with tax dollars that were earmarked for education.

Third, let's go back to the free market argument for charters. Charters would lead to competition, and while the implication has always been that the competition would be about who could run the best school, develop the best programs, hire the best teachers, and just generally do the best job educating students. Instead, the competition is to see which school can do the best job of marketing, spend the most money on professional advertising services, create the best branded image of their product.