It is one of the reliable tropes of the ed debates (isn't it fun that we've been at this so long we now have reliable tropes).  After some negative charter publicity, some reformsters will step up to offer a smattering of defense with a side order of "Why does the media pick on us?"

Alexander Russo offers a weak-sauced rendition of this old standard at Washington Monthly, where he tries to defend Rocketship Academy against the NPR piece from Anya Kamenetz. He thinks that Kamenetz did not include enough happy talk from the Rocketship press kit, though most of his complaint is focused on Kamenetz's use of the word "company" to describe Rocketship. He says this term is "controversial," a term that is "extremely sensitive" in the education world, but which should really just be used for "private, non-profit businesses." He notes that unnamed "defenders" of the piece say that non-profits "often rely on for-profit companies for services and materials and that the difference in tax status is unimportant" which is a bit of a mis-statement, as this defender would say that non-profit charters still function like businesses. They are non-profits like modern hospitals are non-profit, as in , non-profit technically by virtue of the fact that there are no stockholders. But Russo is far too savvy and informed not to know that many, many, many non-profit charters have found ways to make lots of people rich.

In short, it wasn't the opponents of charters who brought up the idea of thinking of charters as businesses. They did that themselves.

This is a frequent feature of the picked-on charter trope. Charter defenders pretend that the oppression they're feeling just came out of the blue, and wasn't the predictable outcome of actions they themselves took.

Neerav Kingsland, charter champion on New Orleans, tries his hand at the genre with "Who is the Villain? Why?" which covers the NPR Rocketship piece as well as Kate Taylor's NYT piece about a Brooklyn school being forced to co-locate and Kate Zernike's brutal look at Detroit charters. He breaks each piece down, doing a nice job of parsing the language used to indicate that charters are the villains in these stories.  And this leads him to a question:

Why do they  go out of their way to find a villain other than the very schools that are currently failing children?

And there's your problem right there, charter folks. Because the better question to ask is, "Why is nit necessary to create a narrative with villains in it?" And charter fans can find the person to ask by just looking in the mirror.

I'll get back to that. But first, Kingsland offers three possible explanations.

1) Charter fans over-promised, and so even if they do well, it's not what they promised, so they look bad.

3) "While charter schools are generally educator led non-profit organizations, many billionaires support charter schools, and I think this support creates a suspicion that charter will increase educational inequality, akin to how the economy has seen a spike in inequality over the past two decades."

#1 is sort of true, except that charters really haven't got all that much success to point to whether you're thinking of their promises or not. #2 would be nice if it were true, but if it were true, the last ten years of news coverage of education would surely have looked a lot different. #3? Kingsland is too smart to actually believe #3. Modern charters are not remotely "generally educator led" (no, you don't get to count people who were in TFA for two years), and if every hedge fund in the country got out of the charter business today, the charter industry would be dead.

So no, none of these explain the journalistic reversal of fortune. Let me take a shot at it.

First, the news outlet oppression of charters is not remotely a thing. Reformsters in general and the charter industry in particular have had great success in getting news outlets to uncritically present their version of reality. Furthermore, despite the reported complaints of some reform fans, there is a tremendous imbalance of power. All around the country today, a dozen or more guys will sit down in an office and work on pieces supporting various aspects of the charter business, and then send those out to ready and willing publishing outlets. They will do this in a comfortable office because it is their job, what they are paid to do. Meanwhile, I start this blog this morning after cleaning up dished from yesterday's party, while wrangling two dogs (my own, and my visiting son's) and waiting for my wife to get up so we can run errands, because this is not my job. Guys like me are not even allowed to be full members of the Education Writers Association. So if we're going to weight the advocacy efforts on either side, I don't see it tilting toward us public ed folks.

Nor do the articles in question exactly bristle with pro-public ed bias. The pro-charter point of view is present in each article-- it just isn't allowed to dominate the article without challenge. Suck it up, buttercup.

But I think there's another factor a play, and it is totally of the charter camp's own making.

Since the beginning of the modern charter movement, proponents have tried to propel their movement with a hero-villain narrative. Students had to be rescued from terrible, terrible public schools, schools that would always be terrible because they were under the control of the evil, money-grubbing teacher union. Anyone who defended public schools was probably a union shill, possibly and incompetent fool, likely a racist. States were told repeatedly that there was a crisis under way, that students had to be rescued from terrible public schools, right now, today.

Modern charters were sold with the rhetoric of crisis, the language of war, the narrative of Good Guys trying to rescue children from the clutches of villainous public schools. 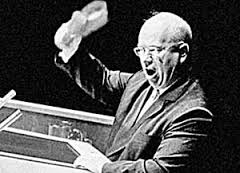 If you want to see that rhetoric in action, just look at today's Dad Gone Wild, in which our intrepid blogger goes to the charter convention in Nashville. There he hears Roland Martin declare "We will fight you until hell freezes over, and then we will fight you on the ice," addressing the public school advocates on whom he is declaring war. Then Nina Rees upped the ante with “We are still busy in this movement making the academic case for charter schools when our opposition is out to destroy us. We cannot let our future growth depend on people who oppose us. We need to play better offense.” Dad noted that he met many great people at the convention-- but the tone of the whole group was dark and combative.

Charter fans here need the same advice as the GOP. When you convince people that there's a crisis and that the crisis has been caused by Very Evil People, you have to consider the possibility that for some people, you will end up on the wrong side of things, that people won't automatically cast you in the role you've chosen for yourself.

When you insist that there is a villain, and particularly when you insist that there's a readily visible black-hatted villain in a situation that is actually considerably more complicated, people will keep looking for a villain, and they may well decide it's you. This is particularly true if, in your zeal to convince them to see things your way, you start shading and spinning and even lying.

Are people on the public school side of the debate also engage in such extreme language and thinking? Sure. But at the risk of sounding like a five-year-old, I am going to point out that reformsters punched us first, and they did it right out where everyone could see it. There are reformsters who saw this was a mistake almost immediately, and kept saying things like, "You can't just accuse everyone who doesn't buy common core and charters of being a crazy evil whack job," but none of those guys were delivering speeches in Nashville, apparently.

The model of heroes versus villains was imposed on the charter debate by charter fans. Charter fans started this game, and they started it by attacking and attacking hard, and they have never let up. At this point, they are people who have repeatedly poked the bear in the face and as the bear proceeds to attack, demand a more reasonable conversation, claiming they are the victims of unreasonable bear behavior. And while some of them are wising up, some just keep jabbing away with the stick.

Charters are sometimes treated as villains, in part, because they have worked so hard to sell a narrative in which there must be a villain. Then some of them have proceeded to act like villains.

This whole dynamic reveals modern charter fan motives. Whether it's a sincere belief in free markets, a sincere belief in a need for complete system change to uproot systemic racism, or just plain old-fashioned greed and opportunism, many charter boosters have set a goal of replacing public education, sweeping the old public schools away, and that kind of grand ambition needs a narrative that justifies that wholesale destruction. The narrative telegraphs charter intent as clearly as pounding a shoe on a podium and yelling, "We will bury you!"

I sometimes try to imagine a different universe. Imagine that at the beginning of the modern charter movement, charter operators had floated a narrative like, "We see some real problems in the education system, and we want to be part of the solution. We think we have a new perspective to offer, and we think we can partner with public schools-- which are, after all, where you find all the people who wanted to commit their lives and careers to educating our children-- to improve education in America. This is a problem we can help solve, and working together, we can make great strides." Imagine if that were the narrative, and not a narrative set in a black and white world where somebody must be the villain. But of course, to have that conversation, charter fans would need to have different motives. I don't know what conversation that would have gotten us, but it wouldn't be this one.