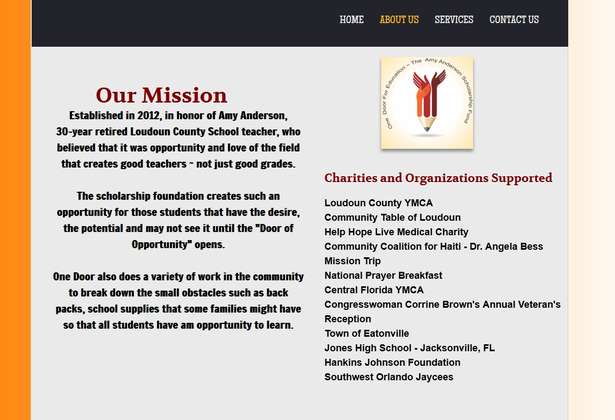 That's the old page from the One Door for Education website, a site that isn't so active these days. The scholarship foundation was supposed to be funding education and student scholarships. But since the beginning of 2016, it has been operating under the adjective 'beleagured"

That's because it turns out to be a huge scam. Back in January, the Florida Times-News has worked out some of the details that gave the charity the smell of fraud. The charity was headquartered in a single-family dwelling in the suburbs NW of DC. The charity's neighbors-- and several of the charities it supposedly supported-- had never heard of One Door. And it had never filed any of the paperwork that usually goes with being a non-profit charitable foundation.

Today, the US Attorney's Office in Florida's Middle District lowered the boom on the folks behind the scam-- Congresswoman Corrine Brown and her chief of staff, Elias "Ronnie" Simmons.

The indictment alleges that between late 2012 and early 2016, Brown and Simmons participated in a conspiracy and fraud scheme involving One Door for Education – Amy Anderson Scholarship Fund (One Door) in which the defendants and others acting on their behalf solicited more than $800,000 in charitable donations based on false representations that the donations would be used for college scholarships and school computer drives, among other things.  According to the indictment, Brown and Simmons allegedly solicited donations from individuals and corporate entities that Brown knew by virtue of her position in the U.S. House of Representatives, many of whom the defendants led to believe that One Door was a properly-registered 501(c)(3) non-profit organization, when, in fact, it was not.

Florida Politics has also been following the story of the fake charity and the Jacksonville, Florida, representative. The scope and audacity are impressive-- the scam managed to raise about $800,000, only about $1,200 of which actually made it to any students. The rest was treated as Brown's slush fund to do everything from pay her taxes to sponsoring events in her honor.

There's no apparent reason (yet) to believe that the many contributors knew they were contributing to Brown's personally giant pile of money, but Brown worked her contacts hard for contributions, going as far as sending fancy fund-raising letters to raise money for a youth trip.

It's an impressively audacious scam, and a reminder that people are always happy to fork over money if it's For The Children, even if they aren't very careful about paying attention to where that money went.