I took a look at the Democratic Party's platform, so it seems only fair that we look at what the GOP has to offer now that the document is available. Spoiler alert-- education is just a scruffy nerf-herder at the Mos Eisley café. 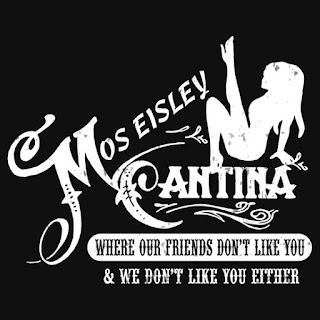 You can get this as a t-shirt

Before we even get to direct statements about education, let's look at a not-unrelated premise statement that comes right up front.

Prosperity is the product of self-discipline, enterprise, saving and investment by individuals, but it is not an end in itself. Prosperity provides the means by which citizens and their families can maintain their independence from government, raise their children by their own values, practice their faith, and build communities of cooperation and mutual respect.

So, two things to remember. First, if you're poor, it's because you lack a set of fundamental virtues. Second, if you're rich, that entitles you to live according to your own rules.

Those premises tell us a lot about what to expect on the subject of public education. But let's see what's actually there (not that Trump will feel bound by any of it, but just for curiosity's sake...)

Education: One Scent in a Stinky Potpourri

Education is rolled in with families, health care, and criminal justice. And the GOP immediately displays the pretzel-like knots they have tied themselves in by embracing both 1) a government that doesn't intrude anywhere and 2) a government that finds ways to make people live the way They Are Supposed To. So, the government should leave families alone and also, every child should have a mommy and a daddy.

The GOP thinks that poverty exists because progressive government puts "structural impediments" in the path of poor people, even though they said earlier that prosperity is the product of virtue. So confusion there.

On the other hand, in terms of education, the GOP opens with language that would be impressive if I thought they really meant it:

Education is much more than schooling. It is the whole range of activities by which families and communities transmit to a younger generation, not just knowledge and skills, but ethical and behavioral norms and traditions. It is the handing over of a cultural identity.

Which would sound pretty nice if the GOP had not made it clear that some cultural identities are more valuable than others.

The platform does go on to say that one size does not fit all, we should not get education standards from the UN, and school choice should be everywhere. And it recycles a paraphrase of the soft bigotry of low expectation.

On the other hand, the GOP says tests and teaching to the test are Bad Things.  Except that "strong assessments" so that teachers can figure out how to teach-- those are Good Things. So roughly the same empty rhetoric as the original Dem platform.

Teachers shouldn't be sued frivolously, and they should be able to maintain discipline in their classroom. But they should be held accountable for student performance (even though people and presumably students too prosper--or don't-- based on personal virtues)

The GOP also wants the Bible back in school, and they believe that school districts should make use of teaching talent from the business community, STEM jobs and the military. So, anyone can be a teacher. And of course tenure ("rigid tenure") should be "replaced with a merit-based approach in order to attract the best talent to the classroom." This despite the fact that there is zero reason to believe such systems work.

The GOP is all about excellence, and not that stupid federal "throw money at education" excellence. They make the somewhat astonishing claim that "after years of trial and error, we know the policies and methods that have actually made a difference," so before the federal government gets out of the way of local control, it will announce which one size of policy and instruction will fit all schools. Their list of "must-do" policy? Choice, back to basics, STEM subjects, phonics, career and tech ed, no social promotion, merit pay, strong leadership from administrators and locally-elected school boards. We must assume that the GOP has special inside scoop, since out here in the real world, most of those items have not proven to be successful at all.

The GOP wants all this excellence cheaply because we spend too much on education (other people's) children. Choice choice choice is the answer. Also, block grants so that states can distribute tax dollar largesse as they wish.

Also, because the GOP is the party of unintrusive small government, and they understand that education is about passing on a community's culture, they would like all schools to teach English First. Also, the only sex ed program that should be used is abstinence only. Because intrusive government is bad.

So telling students only about abstinence is Good, but campus policies about "political correctness" are bad. Students and schools should be free to talk about any of the things that the GOP-run government says it's okay for them to talk about.

Meanwhile, college is too expensive and that would be fixed if private sec tor lenders had a chance to make money from college loans.

And as if the platform weren't signal enough, the nomination  of Governor Pence for VP is a super-strong signal, as Pence has spent the last few years signaling that he would like to do away with public education entirely.

Meanwhile, the Democrats did manage to make their platform marginally less rotten. But public education is not getting any new friends at the federal level Pay attention to your local elections.