Hillsdale College is one of the leaders in Christian Nationalist education, and have been pushing charter school programs for years. We've looked at them before. Their current president is Larry Arnn, a guy who is a lot heavier on the conservative than the Christian. And it turns out he has some spectacularkly insulting thoughts about teachers and education. 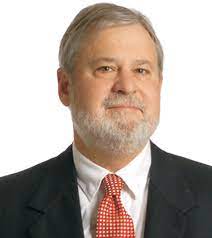 Arnn's conservative credentials are impeccable. He's one of the founders of the Claremont Institute, a conservative thinky tank (mission-- "to restore the principles of the American Founding to their rightful, preeminent authority in our national life") founded by students of Harry Jaffa (Jaffa was the Goldwater speechwriter who penned the "Extremism in the defense of liberty is no vice..." line); Hillsdale has a library in named after him. The Institute was quiet for years, but has emerged as a big time Trump booster funded by folks like the DeVos tribe and the Bradleys, and pumping out ideas for selling the Big Lie and the Insurrection. Arnn is also a trustee at the Heritage Foundation, which at one point offered him its presidency.

Arnn has been a Trump supporter, and the college has fallen right into MAGAland as well. Or as Politico Magazine put it in 2018

Trump University never died. It’s located in the middle of bucolic southern Michigan, halfway between Lansing and Fort Wayne, 100 miles and a world away from Detroit.

The college uses Trump mailing lists to raise money. They used to sponsor Rush Limbaugh's show. They get grads placed on the staff of legislators such as Jim Jordan and Kevin McCarthy. In 2017, for some reason, Senator Pat Toomey created a little piece of tax reform that would have carved out atax treat for Hillsdale alone. Arnn was on the shortlist for Secretary of Education for Trump; when Trump whipped his super-duper 1776 Commission to create some nationalistic education stuff for the country, he put Arnn in charge (and Hillsdale still offers a version of that terrible "patriotic" curriculum. They don't have a great history with LGBTQ students. Erik Prince (Betsy DeVos's brother) is a Hillsdale graduate.
Hillsdale has a charter presence in many states, but they landed a particularly generous patron in Governor Bill Lee of Tennessee, and it was in a special closed-door reception that Arnn sprung Lee as a surprise guest and proceeded to slam teachers. But somebody made a video and handed it off to a local news station, so now we know some of the awful things that Arnn said and that Lee let slide.
As reported by NewsChannel 5 of Nashville, Arnn's comments included:
“The teachers are trained in the dumbest parts of the dumbest colleges in the country."
“They are taught that they are going to go and do something to those kids.... Do they ever talk about anything except what they are going to do to these kids?"
"In colleges, what you hire now is administrators…. Now, because they are appointing all these diversity officers, what are their degrees in? Education. It's easy. You don't have to know anything."
“The philosophic understanding at the heart of modern education is enslavement…. They're messing with people's children, and they feel entitled to do anything to them.”
“You will see how education destroys generations of people. It's devastating. It's like the plague.”
“Here's a key thing that we're going to try to do. We are going to try to demonstrate that you don't have to be an expert to educate a child because basically anybody can do it.”
Given the chance by Channel 5 to reply, Lee's office didn't even try
"Under Gov. Lee, the future of public education looks like well-paid teachers and growing a workforce to support our students and build the profession," Laine Arnold said in an email.
Lee has always been a big fan of privatization in education, and he has been particularly excited about bringing Hillsdale's brand to Tennessee. That may be why he never interrupted or contradicted Arnn in front of an audience that laughed at some of these lines. Nobody is backing away from this; Kevin Williamson at The National Review chirped up today to say that Arnn's dumbest of the dumbest crack is true.
Lee Believes that Hillsdale has a "number of initiatives that align with our priorities in Tennessee," according to Lee spokesperson Casey Black. Lee has talked about the importance of teaching "true American history, unbiased and nonpolitical," but Hillsdale promises neither, with a Libertarian, nationalist approach that hews to one narrow interpretation of history. Lee also claims that "Hillsdale's charter schools in our state will be public secular classical education schools," and while Hillsdale has learned to keep its Christian bent less obvious in its charter schools, there's no question that religion is part of its brand. Per its website:
In the words of its modern mission statement, the College “considers itself a trustee of our Western philosophical and theological inheritance tracing to Athens and Jerusalem, a heritage finding its clearest expression in the American experiment of self-government under law.”
If you are shaking your head at Tennessee, I suggest you look around your own state first, because these public education-hating faux Christian right wingers are all over the country, and when he's selling his product in public, Arnn is rarely as blunt as he was before the Tennessee crowd. Make sure everyone gets to hear what he really thinks.
Posted by Peter Greene at Friday, July 01, 2022
Email ThisBlogThis!Share to TwitterShare to FacebookShare to Pinterest