Put An Insta-Bunker In Your Classroom!

I want to be very clear. This is not The Onion.

A company named National Safety Shelters ("Keeping People Safe") is marketing something it calls in-classroom safety shelters. Here's an image from its website. 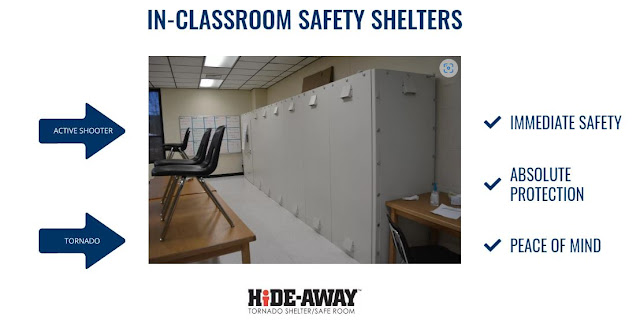 The ultimate in hardening your classroom--a solid bubble in which to hide your students. There are videos. like this one entitled "National Safety Shelters' Ultimate Solution To School Security" which starts with the Tinkly Piano Of Concern and statistics about school shootings and tornados (tornado protection appears to be a big part of the selling point here).

If you just want a quick tour of one of these, there's a video for that, too (accompanied by the Folksy Guitar Of Calmness). It's a big metal box that can be custom sized for your room. (Also, you can watch this stunt where they put one in a school that was being demolished.)

In this video, we also learn that they're made of 3/16" ballistic steel. Note that this video is from 2018, but it only had 27 views. Back in 2018 the Big Box collapsed against the wall; I'm not seeing any such feature in the newer iteration.

The company has managed to score at least one school district client, and they are milking it hard. The district is Quitman School District in Quitman, Arkansas, a city of a little over 5,000.

The pitch is not just "keep the students safe," but also "increase revenue for your district."

Dennis Truxler, Superintendent at the Quitman School District, credits the security the safety pods provide ― and the peace of mind that comes with knowing they are there ― as part of the reason for the district's 20% increase in student enrollment. Most of the new students have matriculated in from neighboring districts. Significantly, revenue from the increase in student enrollment has more than covered the cost of purchasing and installing the safety pods.

The shelters, they insist, only take up unused wall space and only 5% of the room area which is, of course, in many schools about 5% more space than a teacher has to spare. Or maybe in some districts the insta-bunkers can be installed to cover up holes in the wall and leaks in the ceiling; I'm sure "We can't afford to fix up your building, but we can buy some big metal boxes to puit in it" will be a winning message. Some of the material points proudly to the unit that Quitman installed in their cafeteria which the principal thinks would probably hold all their elementary students. Did I mention that total enrollment in the district is 746? I'm trying to imagine what my old crowded band room would look like with a box installed big enough to hold 150 students.

In this video, made the year after Quitman installed their insta-bunkers, you see the shelters in various rooms, and you can see they're already starting to take on their ultimate form-- very sturdy storage. There's room to stash stuff on top, you can decorate the outside. And as nature abhors a vacuum, a classroom abhors empty space that could be used to store that giant stack of textbooks or those bins full of manipulatives. If the insta-bunkers don't fill up with various classroom stuff, I will eat a military grade hat. (And I do not even want to contemplate the creative uses students will come up with.)

It is just about the ultimate expression of the "Do anything about school shootings that doesn't involve actually trying to get a handle on guns in this country" mindset. We can't even try to stem that tide, so just give them a metal box to hide in. Just devote 5% of precious school space (and money that could have been spent on education) to walling students and teachers up in big metal tombs to help harden the target. It's also a window on the kind of world you get when schools are convinced any damn fool thing in order to help their financials by chasing market share.
This is terrible on so many levels, but National Safety Shelters sent this press release out to everyone and their brothers, so sadly, it's a good bet that somewhere in the US today, somebody is reading about this and thinking, "Hmmmm.... maybe that's what we need."
Posted by Peter Greene at Wednesday, July 13, 2022
Email ThisBlogThis!Share to TwitterShare to FacebookShare to Pinterest