Parenting Is All About Losing

As I've been immersed again in the world of children's music, I'm struck by how much of it is sad. Not "when the bough breaks, the cradle will fall sad," but a kind of melancholic ache behind the music itself.

I think it's the losing.

My wife asked me the other day, "Is it always like this?" We had turned around and had one of those moments when you realize that your baby looks like a small child, an undersized person, but not an infant any more. It's a truly mixed moment emotionally, one part pride and joy at how big your child has grown, and one part sadness and loss because there was an infant just here a moment ago and now that tiniest person is gone forever. 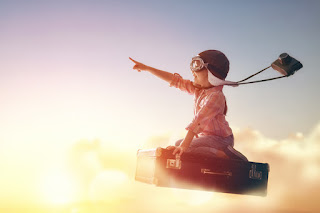 "Yes," I said, and I think back to my older children who are now in their early thirties with children of their own, and I can't even count how many versions of those people have gone by. It's not necessarily all transitions into new versions of themselves, but every step of growth is a step away, a loss of something. You knew everything about them. They lived under your roof and had their own room and you saw them every morning and last thing at night and you were keyed into their every need and then, not in a long slow glide, but in a seemingly endless series if jerks, like tectonic plates snapping past each other, each of those things is lost.

Not that it's all loss and sadness. Every stage of my older children's lives was the best so far, the best until the next new stage revealed itself to be even better. They get stronger and wiser and more terribly beautiful each time. It would never be enough to try to hold them back, to trade the unnatural prolonging of one stage for an unrealized better stage to come. Not that some parents don't panic and try some emotional equivalent of binding their children's legs so they won't learn to walk or run. It never works. Children were born to grow, and grow they will, with or without our help. We can only make the process better or worse, but we can't stop-- only do damage by trying.

This is the season where parents feel it. Some of these changes sneak up quietly, and you never see them coming until you turn around and think, "Good lord, he's like a little man." But some you can see barreling toward you from far away. The Prom. Graduation. The stuff that forces a parent to realize "There are only so many days left with this person, and then she'll be gone, and dammit, she's actually excited about it but please, oh, please God, let me have just a couple more extra days with this person before I lose her."

Mother's Day is tied up in ancient history and churchiness and Civil War stuff. The modern version  became quickly tied up in commercialism to the point that one of its major founders withdrew her support. So I guess it's just fortunate that it lands here in May, when parents are counting down those last days and can use an excuse to say "Come here and actually look at me for a few minutes before you go back to planning your escape."

Teachers go through the cycle of loss, too, but without the burden of having known the students when they were a younger version of themselves. Where a teacher can just be delighted by a students progression, a parent always has to feel that pang, however tiny, of loss. I expect that when I was in the classroom, even with parenting under my belt, I sometimes failed to really appreciate and hear that parent stress, that sometimes I was unthinkingly saying, "Look at how great a job they're doing of leaving you behind. Look at how swiftly you're losing this one!" It's on the not inconsiderable list of ways in which I could have been a bit more sensitive.

I don't want to overstate the case. Good parents are excited and filled with joy to see how great and strong and brave and capable and awesome their children can become, and it is an unspeakably great big warm ball of blasting sunshine to experience your children as grown humans, fully themselves and making their way in the world.

But there is always the losing.

I had to take a break in the middle of writing this to go hold Twin B, who stirred from his nap and needed to be held for a bit while he fell back asleep. My chest and arms are still warm from where he was lying. Some day the little guy who needs me to wrap him up in my arms so he can feel comfortable will be gone, a bigger stronger little guy in his place. That's a great thing, a thing that is as it should be, and the thing that puts a little core of loss in the heart of parenting.