On May 7, a group of four bills related to charter schools suddenly popped up, referred to the House education committee in the state capitol. Surprise! Let's take a look:

This bill is supposed to strengthen the "ethical requirements" for charter schools (including cybers). It sets requirements for annual independent financial audits and puts limits on how much money charters can hold in unassigned fund balances (just parked in the bank); public schools also have a limit on fund balances. And there are new requirements for some financial transparency between the charter and the local district. 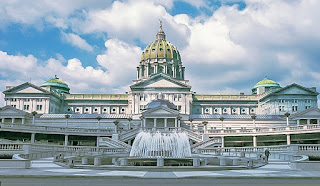 There are also some advertising limits. For instance, charters can no longer advertise themselves as "free" but must acknowledge that they are paid with taxpayer dollars. There is some language tightening rules  on self-dealing and nepotism and financial disclosures for charter bosses.

Other than a section that deliberately blurs the line between public and charter schools, this is a pretty good bill.

This bill focuses on facilities. It gives charters the right of first refusal for purchase or lease of any unused district facilities. It requires public schools to provide testing locations for charters. And  charters can use religious facilities if they keep the religious stuff covered up or out of sight.

It also allows charters to expand to multiple locations within the authorizing district-- this used to require district approval, but would no longer do so.

This bill is intended to "improve" the chartering process by creating a standard charter application form and "improving" the student enrollment process. It also gives families with multiple students in the same cyber charter to opt out of having multiple computers (because cybers need one more way to make a few more bucks).

The bill lays out some of the specifics that the charter application form should include-- things like how the trustees will be selected and an organizational chart for the school and evidence that the management company has done some work before. But it also makes it clear that local school districts may not fiddle with, alter, or go beyond the state's official form, thereby stripping them of a b it more power over local education and taxation.

And the bill includes a requirement for a standard student application.  The unified application form is usually a red flag.

This bill would allow charters to offer dual enrollment with any college willing to enter into such a deal.

Each of the bills has a group of co-sponsors, though the proposer of record is different for each one. Despite the different names on each of the bills, each bill's memo concludes with this same language:

The reforms embodied in my legislation is part of a legislative package of four bills critical to improving and strengthening our laws related to charter schools, which was groundbreaking upon its enactment in 1997 but has become outdated over time. We must make these reforms now in order to maintain charter, regional charter and cyber charter schools as a strong, quality school choice option for the Commonwealth's children and families.

If that sounds odd, it's because whoever wrote this butchered subject-verb agreement. But don't let that distract you from the assumption that charters are strong, quality schools. Cyber charters in particular are expensive failures, stripping districts of money while producing lousy results.

HB 355 provides some useful reform. The other three bills are an attempt to expand the reach of charters in Pennsylvania.

If you are in PA, you need to speak up-- and quickly. The House education committee will be considering these bills on Monday, 13. Did I mention that they only just turned up three days ago?  So check out the list of members and shoot off an email or even a phone call before Monday 11:30 AM.

Update: All four bills passed the committee vote.
Posted by Peter Greene at Friday, May 10, 2019