What She Taught Me

I've written about Miss Gause before. She was my elementary school vocal music teacher, and she had a critical effect on me in two major ways.

First, she was fairly relentless in confronting the Monotone Boys I'm-Too-Cool-To-Sing Chorus in the back of the room. She harangued us into listening to pitches and more or less matching them. Now, in my school students took a listening aptitude test in fourth and fifth grade to determine if we were eligible to study an instrument. I flunked in fourth grade and passed in fifth; the difference was Miss Gause. It is not humanly possible to imagine what my life would have been like if I hadn't played an instrument. 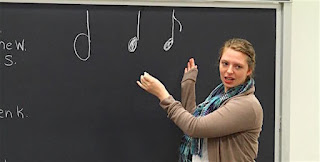 Second, she paddled me (it was the sixties). I was in the back of the room performing what I was certain was a hilarious imitation of her conducting technique. She failed to grasp my comic genius, and I received a fairly fierce paddling, there, in front of the class, so that it was painful, and embarrassing, plus I had to keep from showing how much it hurt.

The paddling itself was not terribly influential. But what stuck with me was what came next, which was nothing. She didn't treat me any worse because i had screwed up. I was not forever after branded a Bad Kid. I misbehaved, I received a consequence, and then the incident was over and done. For me, it was the beginning of understanding that "I disagree with you" or "I think you've done wrong" were not synonymous with "I hate you" or "You are a terrible human being."

I carried that into my classroom, and always tried to keep "No, that's wrong" and "I need you to knock that off right now" separate from "You suck" or "I want you to get off the planet." I was pretty explicit about it, too, because I wanted students to be able to hear the difference between assessing the quality of a piece of writing and judging someone's right to take up space on the planet. I think the world would be a better place if we could all approach disagreement without considering it a referendum on a person's right to exist.

So in some fairly important ways, I am who I am because of Miss Gause. And, in retrospect, I think she offers another important lesson of Teacher Appreciation Week.

But I have to tell you this about Miss Gause-- she was not that teacher. We had no special bond. I didn't stay in touch when I went to high school. She didn't send me little notes. While I was in her class, she did her job-- I don't think any extra miles were involved. And yet.

As a teacher, it's easy to measure yourself against those heroic super teachers, like the awesome teachers on tv (who apparently only teach one class a day) who touch hearts and lift lives and just generally make us feel as if we're not quite up to that super standard. And yet.

It's one of the oddities of teaching. Every day that you step into a classroom, something you say or do will have a huge effect on some student. But you will never know ahead of time what it is you're going to do. You may not even recognize it when it's happening; retirement shook loose a lot of old students with "That one time you said X really affected me" stories, and in many cases, I had absolutely no memory of that really important moment that they remember.

If you are teaching, you are literally accomplishing more than you know. Your challenge is to make every moment of every day count. There are certainly moments of high drama and shattering success in teaching, but there is also a steady dailiness to the work that comes with a focus on trees while the forest fades into the background. But if you are a teacher, you are planting that forest, whether you can see its full shape or not. Know that what you do changes things.