Diane Ravitch was the first major voice of the resistance to the modern corporate "reform" of education, in part because of her newsworthy turn from the reform ideas and peers she had previously embraced. An education historian, she has laid out the problems with the recent assaults on public education in several solid and well-built books (with another one on the way). 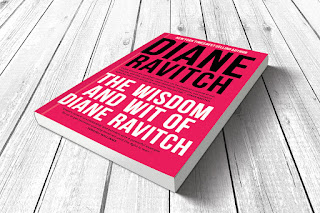 But Ravitch is a tireless voice beyond the books, with numerous appearances, interviews, and writings. Her social media presence has been unrelenting, and her writing output is prodigious-- Huffington Post, New York Review of Books, newspapers and periodicals around the country, and her own blog. Ravitch's blog is like the Rick's of public education advocacy. Ravitch has been a generous amplifier of other voices (mine included), but the blog is animated by her own sensibility-- sharp, knowledgeable, witty, and intensely focused on preserving what is valuable in US public education and exposing the workings of privatizers and profiteers who seek to dismantle it.

To read all of Ravitch's articles and blog posts would have been a challenge, up until the publishing by Garn Press of The Wisdom and Wit of Diane Ravitch, a volume that collects many of her best short pieces from a wide variety of sources.

Because it's a large collection of short pieces, the book lends itself being read any number of ways, including simply skipping around and looking for the topics that you're interested in. But its chronological organization also makes it effective as an on-the-spot history. The very first piece takes us back to March of 2010 and the Wall Street Journal; "Why I Changed My Mind About School Reform" puts at the beginning of Ravitch's journey from conservative ed reform player and foot soldier to her new role as a leading voice against those same reforms.

From there, it's interesting to watch some of the web of ed reform be spun out-- particularly because one aspect of modern ed reform is to constantly rewrite the past. Common Core? Never heard of it. Boy, all this testing is terrible, and I have no idea how it ever became such a big deal.

Remember when Joel Klein and Condoleezza Rice led a task force that decided we'd better adopt Common Core Standards as a matter or national security? Remember when everyone actually believed that teachers wrote the standards, back before we'd unraveled and spread the truth? Remember the first time that Eva Moskowitz went head-to-head against Bill DeBlasio? Remember when some people still believed the Chinese schools were a model to follow? Remember when we learned that Cory Booker and Mark Zuckerberg had made a million dollar hash of things in New Jersey? Ravitch was paying attention to all of that, and it's here in the book.

This is perhaps Ravitch's greatest strength, beyond even her muscular intellect and her laser-sharp wit-- she has been paying attention, and she still is paying attention. It is the challenge of issue fatigue. Almost anyone who is invested in an issue of public policy has moments when they say, "Never mind-- I'm going to go hide in a tent for a week and catch my breath" or "No, this is the 143rd sub-issue that's come up, and I just can't keep tabs on that, too." But Ravitch never seems to lose the wind from her sails (despite periodic announcements that she's going to slow down, really, this time she means it), and all of us who care about these issues benefit from her attention.

For her other books, Ravitch is able to synthesize pictures of a whole bunch of trees into a comprehensible rendering of a large and complicated forest. Wisdom and Wit collects an album of tree images, sharp and clear and close up, with the full forest in the background. It's a great introduction to some of the issues over the last decade for people who have not been paying close attention, and it's a strong, sharp reminder of some of the specific battles even if you have been paying attention. All told in Ravitch's distinctive and clear voice; this is a much more personal conversation than you find in her other books (It would be great fun if Garn could convince her to do an audio book version.)

An excellent choice for an addition to your pile of summer books. In fact, the short pieces even make this a good beach read. Order your copy today.
Posted by Peter Greene at Friday, May 17, 2019