The big headline on Friday was that Bernie Sanders was going to call for a ban on for-profit charters, and if the story had stopped there, I would be unimpressed. Hillary Clinton managed to condemn for-profits, and while that's a nice low-hanging fruit for politicians to grab, regular readers of this blog know that a non-profit charter is usually just a for-profit charter with a good money laundering system.

The good news, however, is that the story didn't end there. In fact, some of the other details in the coverage were far more encouraging than the headline. "Doesn't suck" is a low bar to clear, but think how few national candidates have cleared it, and Sanders actually clears it by quite a bit. 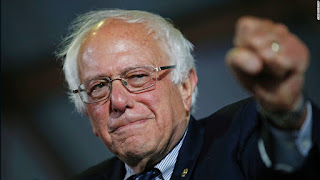 We can get the best look at Bernie's education platform by simply going to his website. I know!! A major political candidate with an actual education page in their site. It's called "A Thurgood Marshall Plan for Public Education," and while I suggest you take a look, let me hit the highlights for you.

The introduction isn't great. The world has changed so education must, too. The damned PISA test rankings. We should lead the world in college degrees. So far I'm unimpressed. But he also notes that K-12 has become re-segregated, and that has had bad effects for non-wealthy non-white students. Then there's free college. And making teaching attractive again.

Now we're down to the bullet items.

The USED Office of Civil Rights needs to be back in business. More non-white school teachers are needed. End the disparate discipline of Black students, and end the school-to-prison pipeline.

That means increasing funding for community-driven de-segregation strategies. Triple Title I funding. Fund expanded teacher training programs at HBCU. This means actually trying to do something about the issue, for a change.

The language here is much stronger than that which was reported. Noting that charters had roots in teacher and parent activism...

But few charter schools have lived up to their promise. Instead, billionaires like DeVos and the Waltons, together with private equity and hedge fund executives, have bankrolled their expansion and poured tens of millions into school board and other local elections with the hope of privatizing public schools. Charter schools are led by unaccountable, private bodies, and their growth has drained funding from the public school system.

That's far broader than simply slamming for-profits. And though the ban is there in his proposals, he also calls for far more accountability for all charters. That's good, because my bet is that a simple for-profit ban simply causes more for-profits to create shells for masquerading as non-profits. And this:

Rethink property tax based funding. Set a per-pupil spending floor. Look out for rural schools. Fund CTE. And this is where the Title I boost comes. My usual complaint here is that fixing school funding is hard to do from federal level.

5. Give teachers a much-deserved raise and empower them to teach.

As with the Kamala Harris proposal, I'm not sure how you do much about teacher pay from the federal level. But he gets some stuff right here, like protecting tenure and collective bargaining rights, triple deduction for educator expenses, and create a grant program for classroom materials. "Empower teachers to provide teacher-supported curriculum that gives students the best possible education," which is pretty vague wordage, were we not coming off twenty years of the feds doing the exact opposite. Honestly, my dream Democrat is one who says, "Here's a list of issues that we can't really fix from the federal level, so we're not even going to try."

Including incentives for local sourcing.

This is the school as a community center concept. Those of us in rural settings already know how this works, but as with most people who address it, Bernie completely misses the main problem. Being a community center type of school calls for easy and ready access to the school-- a place where lots of folks can come and go. The era of school security hardening has ended this in many places.

10. Make schools a safe and inclusive place for all.

Lot of "ensure" here, plus some gun laws and Title IX enforcement.

Is it a perfect package? Does it cancel out the issues surrounding electing another old white guy? Is Bernie done being confused about education?

Who knows. For the moment, let's enjoy the fact that one major candidate has identified public education as a major issue and created one of the best education platforms we've seen in ages. This is where a lot of long, hard activism and advocacy and reaching out has finally paid off. And it's not just about Bernie-- I'm going to hope that some of the other 147 Democratic hopefuls grab a hint and a clue and decide to actually pay attention to public education, too. He has certainly touched a few charter supporter nerves.

We've got a long stretch before the primaries, an even longer stretch before the election. Here's hoping a few more people wake up to the dismantling and privatization of the public education system. If Bernie Sanders helps get that message heard, than I'm all for it. If he pushes Elizabeth Warren to add these kinds of policies to her promise to hire a teacher as Secretary of Education--well, wouldn't that be something.
Posted by Peter Greene at Saturday, May 18, 2019
Email ThisBlogThis!Share to TwitterShare to FacebookShare to Pinterest