Is Your School Year Over Already?

Depending on which state you live in, your schools are now, or are about to be, entering testing season.
It's the magical time of year when your schools must subject students to the annual Big Standardized Test, a narrow slice of testing aimed at reading and math skills. In most states, the stakes are high, including the rating of the school itself as well as the professional ratings for the teachers who work there. And so every spring, schools turn their attention to preparing students for that test.
Fans of the modern test like to argue that these tests are impervious to test prep, which is true if you think that test prep refers only to memorizing the specific answers that will be on the test. And it's true that classic rote memorization is of very little use on these tests. 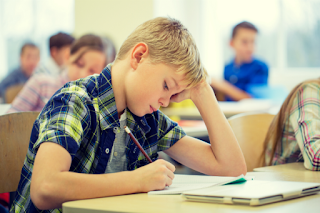 But modern test prep is not about rote memorization. Test prep involves teaching students to think like the people who manufacture these tests. Test prep involves learning the kinds of wrong answers (distractors) that these test manufacturers favor. In a multiple choice test, distractors are the whole game, the little traps and tricks that test writers include to "catch" students in particular sorts of mistakes, so students need to learn what sorts of enticing traps to recognize and avoid. And while students can't memorize specific answers to specific questions, they can expect certain types of questions, and so benefit from practicing those types of questions. For instance, there will almost certainly be a question asking students to use context clues to determine the meaning of a word. That word may well be familiar, and good readers will think, "Oh, I know this word," but the word will appear in a selection that uses it in an unusual manner; the whole point of the question is to trick the student into selecting the common definition of the word rather than the unusual one.
Students can also be prepared to recognize certain sorts of questions. The test manufacturers have certain ideas in mind when they talk about "mood" or "author's intent." Students benefit from practicing these terms and the test writers' intent before test day arrives.
Some will argue that if one just teaches the student well all year, she'll automatically be ready to do well on the test. No. We could get into this in depth, but the short answer is that a standardized test is not an authentic measure of learning or skills. Someone can be a great basketball player; that doesn't mean they will do well on a tricky standardized test about basketball. Someone can learn to be a great jumper, but that doesn't automatically make them great at jumping through a particular set of hoops, nor does learning to complete a particular hoop course make one a great all-around jumper.
Politicians periodically announce their intent to reduce the length of the Big Standardized Test, because they have heard the many complaints about how much school time the test takes up. But the actual days spent ploughing through the test are only the tip of the iceberg. Tested classes may interject test prep materials throughout the year, culminating in an intensive four, five or six weeks of test prep. There will be practice tests throughout the year, taking up additional time. The results of those practice tests may be that students who are "on the line" will be pulled from a study hall or elective and required to take a "course" which is nothing more than a daily period of test practice.
By March or April, all eyes will be on the test and the preparation for it. Then comes the actual testing, which may shut down even grades and classes that aren't being tested because staff is all tied up proctoring the test itself. Once all of that process is completed, teachers may have a few weeks of the year left to teach, if they can get their students' minds back in the classroom. This can be even more problematic in schools that have cute pep rallies and catchy songs to get their students ready for the test; the subtext of that approach is, "This test is the culmination of the whole year," and the unintended result is students who say, "But we took the test already. Doesn't that mean the year's basically over?"
High stakes tests have become the educational equivalent of the office where nobody can get their work done because they're constantly attending meetings to give progress reports on the work they're not getting done. High stakes testing have effectively, drastically, shortened the school year, not just by the week or two required to give the test, but by all the weeks used to get ready for it. Simply abolishing the test, or even removing all stakes from it, would instantly improve education in this country because it would instantly lengthen the school year by weeks.
Not all schools suffer from this issue. Some have administrators who are brave enough to put education ahead of testing. You may be fortunate enough to have such a leader in your child's district, but if not, your school year--the part of the year in which school and teaching and learning take place in an authentic and meaningful way--may already be over.
Originally posted at Forbes