If you glanced at EdWeek's Teacher Beat blog last week, you could be forgiven for thinking that Bill Gates had joined the growing list of tech "regrets" writers. It's a cool new writing genre in which some longtime techy reformster announces that he's had an epiphany and realized all by himself that there's something fundamentally ineffective, misguided and just plain wrong with the baloney he's been frying up lo these many years. We've gotten them from big names and small fish and they are marked by Columbus-style discover, a shitless Sherlockian highlighting of some Truth that unheeded educators have been pointing out for years. 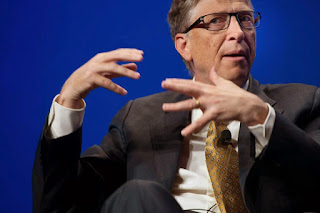 Anyway, a cursory glance at the EdWeek piece "Teacher-Evaluation Efforts Haven't Shown Results, Say Bill and Melinda Gates" would suggest that Gates has had a similar epiphany.

The EdWeek piece is referring to the Gatesian annual letter, their own little State of the Union address. This year it takes the form of answering ten "tough" questions, and among the pack we find a question about education, in which Gates reveals that he has another in the long series of Gates-style non-epiphanies.

1) He is almost always wrong.

2) He never learns anything.

If we look at last fall's speech (both the pre-speech PR and the actual edited-down version he delivered), we can see that Gates knows he's supposed to be learning things, that a shift in direction and emphasis needs to look like a pivot based on a learning curve, and not just flailing off blindly in another direction because the previous flails didn't turn out like you hoped (against all evidence and advice) they would.

What looks on the surface like an admission of failure turns out to be an assignment of blame. Small schools, teacher evaluation, merit pay, and the ever-unloved Common Core have all been a bust, and yet somehow, their failure is never the result of a flawed design, a bad concept, or being flat-out wrong about the whole picture. What Gates invariably announces he's "learned" is that he was basically correct, but he underestimated just how unready people were to welcome his rightness, and he needs to tweak a few features.

So Tough Question #2 was "What do you have to show for the billions you’ve spent on U.S. education?" And his short answer is "A lot, but not as much as either of us would like."

This is classic Gates. "The Zune was a huge success, but we needed to tweak the matter of customers not wanting to buy them." "Mrs. Lincoln thought the play was a triumph, but we might need to tweak that last part a bit."

We made education the focus of our work in the United States because it is the key to a prosperous future, for individuals and the country. Unfortunately, although there’s been some progress over the past decade, America’s public schools are still falling short on important metrics, especially college completion.

It's a curious observation to come from America's richest college dropout. And it's a curious choice to make college completion a metric for measuring K-12 success, as if no other factors were involved in successful completion of college.

We’ve learned a lot about what works in education, but the challenge has been to replicate the successes widely

No. What you have failed to learn is that in education, what works is not using "solutions" that are intended to replicate widely. The very moment you try to a scalable solution, a one size that will fit all, you take a bold step away from what actually works. Next he addresses graduation rate (did you know that it's the Gates people who figured out how to compute the rate correctly).

To help raise those graduation rates, we supported hundreds of new secondary schools. Many of them have better achievement and graduation rates than the ones they replaced or complemented.

SMH. First, "many" is a vague and unimpressive measurement. I believe Microsoft sold "many" Zunes, and yet there they sit, on the ash heap of musical history. Second, comparisons mean nothing if you aren't certain you're comparing similar student populations. If you're getting your results by swapping out your old students for "better" ones, you've accomplished nothing. Of course, that could be why Gates writes

One thing we learned is that it’s extremely hard to transform low-performing schools; overall they didn’t perform as well as newly created schools.

We also helped the education sector learn more about what makes a school highly effective. Strong leadership, proven instructional practices, a healthy school culture, and high expectations are all key.

Yes, you sure helped us out there. We look forward to future studies in which Gates helps us understand that water is wet and the fire burns. Seriously-- how can he possibly think we didn't already know this?

Next, he updates us on the Gates attempt to make teachers better.

We have also worked with districts across the country to help them improve the quality of teaching. This effort helped educators understand how to observe teachers, rate their performance fairly, and give them feedback they can act on. But we haven’t seen the large impact we had hoped for.

Now, if I order miracle hair grower on line and I use it, and my hair doesn't grow back, I might be inclined to question whether or not the hair grower was as miraculous as it claimed. If I had a great system for improving teachers, and I used it, and it didn't look like it worked, I might question whether my brilliant ideas were really brilliant or not. In short, I might wonder if I weren't, you know, wrong. But not Gates. He gives us the three measures for success-- good pilot, self-sustaining system, and spreading to other locations. Then he provides the excuses for why his teacher system failed all three.

The pilot feedback systems were handled differently in each place. Some places, like Memphis, maintained the system, but others didn't (do you suppose they stopped using it because it didn't work). And districts didn't produce enough investment or systemic change. And, Gates says, you have to build consensus among a wide range of people. And at this point, Bill Gates(or some intern) hands the keyboard over to Melinda Gates. And she leaps right in with both feet.

Everything we do in education begins as an idea that educators bring to us.

Nope. Not unless you were suffering from the delusion that David Coleman was an educator when he brought you the Common Core and convinced you to foist it on the rest of us. This statement is simply untrue.

We will work with networks of middle and high schools across the country to help them develop and implement their own strategies for overcoming the obstacles that keep students from succeeding. We will help these networks with the process: using key indicators of student success like grades and attendance to drive continuous learning and improvement. But the substance of the changes they make will depend on what local leaders and the available evidence say are most likely to be effective.

So, those of us who work in education will keep doing what we've always done and you will... help us, somehow? How, exactly? Exactly what educational expertise do you bring to the table, other than several years as self-appointed redesigners of America's education system. Which you've repeatedly failed at. And learned nothing about in the process.

What the letter notably does not address is the new Gatesian plan to double down on Common Core by adding what we've always said was an implied requirement of the standards-- a curriculum, aligned to that monstrous amateur-hour beast. On the one hand, the missing curriculum piece has always been one of the Core's major flaws- the focus on skills while ignoring content is just dumb. Reading is not a skill that exists in some vacuum. On the other hand, designing curriculum is hard, and involves debates that have been raging since the creation of dirt, and anything that Gates offers to the debate will be colored by the fact that, well, he doesn't know what he's talking about. If he hires someone like Pearson to do it for him, then we're into the issue of having a fox design the henhouse. And creating curriculum is generally a local thing-- why exactly do we need someone coming in to tell us how to do our jobs? The icing on top is that none of these issues will be aided by the sales line "Brought to you by the same people who brought you the Common Core."

It doesn't matter. Gates just plugs on, sure that he's right, and even when he's wrong, he's right and somebody else just messed things up.

Bill Gates is not part of the tech regrets wave. He's not a guy who is looking back at the reform techy ideas that he's pushed and suddenly realized that they are a house built on a foundation of sand with a frame carved out of baloney. He is not a guy thinking that maybe it's time for a major course correction rather than just tweaking some cosmetics while pursuing the same old line of bogus unicorns and empty fairy dust.

But he should be.


Posted by Peter Greene at Saturday, February 17, 2018
Email ThisBlogThis!Share to TwitterShare to FacebookShare to Pinterest