Everyone knows and loves the analogy of the frog in hot water. According to that time-honored tale, the frog sits in the pot of water, the heat slowly rising. Things just keep getting slowly but surely worse. But because the rise of heat is slow and barely perceptible, the frog never jumps out, and is ultimately cooked to death.

I'd like to offer a replacement story, one that I think better mirrors the kind of escalating situations that we deal with in education. In place of the boiled frog, may I suggest the gasping goldfish? 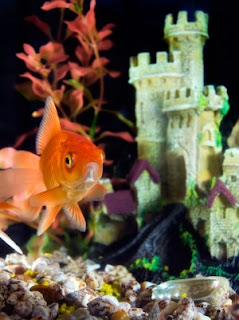 The goldfish wasn't always gasping. It lived in a bowl with a pretty plastic castle that it enjoyed swimming around, though it could never quite swim up to the top of the castle, because there wasn't quite enough water for that. But the goldfish learned how to work with the water it had.

But then a cat came and slurped up some of the water. And the goldfish's keeper stopped by to say, "Look, I'm just going to take a little bit of the water out to water a plant. You'll be okay, right?" And the water level dropped.

And crack opened in the glass of the fishbowl that let a few drops of water leak out every day. And a thirsty bird flew down and sucked up a few more drops. And someone else stopped by to "borrow" a little water to dampen a rag for cleaning off the counter. And someone else dipped a cup in to take some water for the gerbils in a nearby cage because they were getting thirsty.

On and on it went, day after day. Everyone who stopped by the fishbowl only took a little bit of water, and always for a good purpose. But at the end of the month, the goldfish lay gasping on a damp bed of colored pebbles, no longer surrounded by enough water to keep it alive.

If you have been a teacher for the past decade or so, your experience has been of having resources slowly and inexorably taken away from you. We're going to take a week or two in the spring to take the new state tests. We're going to take a few other weeks during the year to take the test prep tests so we can be ready for the state test. We've cut one of the positions in your department to save money-- you'll just teach more kids now. We're using a new method of record keeping for lesson plans, which must now include records of how you're aligning with the standards. We're cutting your class time back so students can spend more time in test prep remediation. We have some more programs that we want you to implement in your classroom. We need to send you to several days of training for this new software. We need you to cover for an absent colleague because we don't have enough subs. We need you to run your own library units because we've fired all the librarians, and we'll need you to use planning time to make your own copies because we fired all the aides as well. And we had to hire an uncertified warm body to teach next door to you-- could you keep an eye on her and help her out? And you aren't getting a raise in real dollars any time soon-- would you just find a way to make ends meet at home, somehow, on your own?

It goes on and on, and nobody ever says "We want to shorten your teaching year by six weeks"-- it's all taken in small increments. And rarely does anyone ask you to spend time on something that is a total and complete waste of your time-- it mostly seems like reasonable, worthwhile stuff.

And yet somehow, after a few years of this, there you are, gasping for air on a damp bed of cheerfully colored stones, remembering when you could actually swim past the second story windows of the little plastic castle. And like our old friend the boiled frog, by the time you realize that you're in trouble, the rim of the bowl may be too far above you to reach.

For most of my career, I became more efficient and focused every year, and that made it possible for me to accomplish more with every new class. This was my professional growth-- getting better at enough things that I could cam more learning into each new set of 180 days. But nowadays, it's different. I still get more efficient, and I still find newer, better ways to do my job and build my craft. But I no longer approach each year with the question, "What more can we do this year?" Now my annual Big Planning Question is "Do I have to cut something again this year, and if so, how can I manage those cuts for the least possible damage." In terms of the quality and quantity of education I can deliver to my students, I peaked years ago, and as the years have drained away time and support, I've just been trying to minimize the damage to the work I do.

Is the fish growing if it keeps coming up with clever ways to swim in less and less water? I suppose so. But it sure doesn't feel like the kind of growth that makes you feel like the bowl is half, or three-quarters, full.

This is not a whine. You get what you get and you do the best you can with what you've got-- that's the job in a million different work settings. And when all is said and done, teaching is way more rewarding and important than swimming around a plastic castle. But if you want to understand why teaching isn't quite the draw it once was-- well, I'd say check how much water is left in the bowl.