Should Dems Get Behind Charters

Last week the Voices of San Diego website featured an opinion column by charter high school senior Katie Anderson. The title pretty much cuts to the chase-- "Charter Schools Should Be Part of the California Democratic Party Platform."

It's a good quick look at the fallacious arguments still circulating in favor of charter schools. Anderson up front announced her intention to register Democrat on her 18th birthday, because the party aligns with so many of her values. Except one. Why, she asks, is the Democratic Party not aligned with her on "the value of charter schools in the public education system." 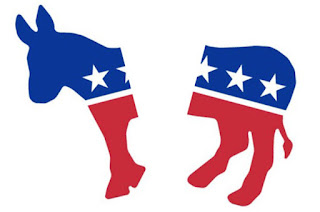 It's an.... interesting question, because at this point, the Democratic Party's position on charter schools is a bit vague. You may recall that the battle over the Dem platform for the Presidential campaign involved some battling between DFER ("Fake Democrats for Education Reformy Stuff") and actual supporters of public education; the public ed supporters won, but that was in crafting a platform to support a Presidential candidate who was always pretty charter-friendly. The Obama administration was pretty charter friendly. And plenty of prominent Democrats are big charter fans. So does the party itself have an official position?

Sure, they've worked hard to disavow a whole bunch of policies for no real reason except that those reform policies (including charters) are now the official policies of the Trump/DeVos administration, but that disavowal has involved a lot of dancing and twisting and selective amnesia. Democrats now disavow some reform policies because of the current administration, but that involves being shocked-- shocked!!-- that charters are primarily a conservative policy. But they always have been.

Bottom line: I'm not sure that asking the Democratic Party to get behind charter schools isn't much like asking a hungry person to get behind an all-you-can-eat buffet.

Charter schools are public schools of choice that offer a valuable alternative to the traditional, one size-fits-all educational model. They allow families to choose the best path that will offer their children academic success. They are independently managed, and for that independence they offer greater accountability — they must be re-approved every two-to-five years by a local district, county or state education board to operate.

No, charter schools are not public schools, because they are not accountable to representatives of the public, nor do they have to accept any student who shows up at their door, nor are they subject to public oversight. They allow some families to choose-- but even if they allowed all families to choose, that would leave unaddressed the issue of disenfranchised taxpayers, who have no say about how their school tax dollars are spent under a choice system. Trading independence for accountability has always been the sales pitch-- but the accountability simply doesn't happen. Charters keep their financial records a secret, feel free to push religion, discriminate against the Wrong Sort of Student, and in many locations, avoid being shut down even when they are disastrous and obvious failures. And that's before we get to all the frauds and scams that operate under the charter banner.

Aren’t choice and the desire to raise up those in socially and economically disadvantaged populations part of the Democrats’ core values? A charter school education is not a red or blue issue; it is a students’ educational rights issue.

So far, there is little evidence that charters raise up those in socially and economically disadvantaged populations. And because states consistently refuse to fully fund schools, but instead insist that multiple parallel system can be run for the same money previously used to run just one system, we have a zero-sum game where every charter that prospers does so at the cost of a public school. Even if charters did raise up the "socially and economically disadvantaged," the current system insures that for very student who is "rescued" from a public school, there are a dozen students left in that public school who are now facing greater challenges with fewer resources.

Anderson does have one good point:

It’s unfair that children and grandchildren of Democratic school board members and California legislators get access to charter schools while these same elected officials are creating roadblocks that limit more students from having that educational choice. This is elitism and hypocrisy at its worst and really should have no place in the Democratic Party.

I don't know if it's unfair, but it's certainly hypocritical. But if Anderson thinks that elitism and hypocrisy are out of place in today's Democratic Party, it's possible that her charter-school education sheltered her from a few things. Particularly when it comes to charter schools, the Democratic Party is deeply committed to having it both ways, depending on which way the wind is blowing, what money is being wafted on that breeze, and, occasionally, the actual principles of the individual politician. I hope Anderson enjoyed her demonstration at the California convention; now that it's over, I encourage her to study up a little harder on charter school policy.

In the meantime, what the Democratic Party should get behind is transparent, publically owned and operated schools that are fully funded and committed to providing excellent education for all and not merely "access" to a select few."
Posted by Peter Greene at Wednesday, February 28, 2018