Hess noticed that much of the ESSA planning rolling in looks suspiciously like TPS report work.

But you rarely see the paper-shufflers get as much ink or as many pats on the back as you do in schooling. One of the more striking examples of this is the recent fascination with state plans for the Every Student Succeeds Act (especially where they build on decades of paper-driven plans to improve "teacher quality"). For reasons that escape me, ESSA's required federal filings, which have been assembled by hordes of well-meaning state officials and consultants, have been treated not as largely meaningless paper exercises but as something deserving of breathless notice from education advocates and press (including American Idol-style contests and foundation-funded independent review boards).

There is something childishly naive about the bureaucratic belief in the power of paperwork to bend reality. This is not a new feature in education. You may recall that Race To The Top and RttT Lite (More waivers, less money) both featured a required plan for moving high-quality teachers around to districts in need. Nobody ever figured out how such a thing could possibly be achieved-- but everybody had a plan about how to achieve it. 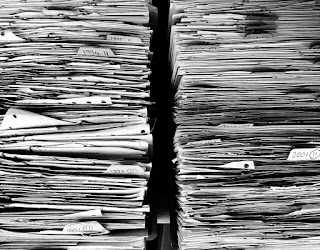 The grandaddy of modern useless paperwork would have to be all the district plans for "aligning" curriculum, the process by which we were all supposed to adapt our curricula to the Common Core State [sic] Standards. In many districts, the process was pretty simple.

1) Wipe dust off old curriculum.
2) Write down standards numbers beside old curriculum items
3) Add new items to curriculum to "bridge gaps."
4) Put curriculum binder back on shelf to gather more dust.
5) Go back to teaching your class as you had intended to in the first place.

Meanwhile, folks on the state level threw giant parties to celebrate how they'd reshaped the face of education.

But paperwork frequently bears absolutely no relationship to reality. Again-- not news. Folks in industry have long understood that the best way to improve a company's safety record is to reduce the number of accident reports, which is way easier to do than, say, making the workplace a safer place where fewer accidents happen.

The most incredible and tragic example of belief in paperwork would be the Great Chinese Famine. In an attempt to transform China's economy from agrarian to industrial overnight (the Great Leap Forward). Farmers were moved into the city and to combat the possibility of a drop in food production, Mao demanded-- regular reports. So in district after district, local leaders simply lied about food production levels. The paperwork that arrived in the capitol looked good-- and millions of Chinese starved to death because you can't eat imaginary food on fake paperwork.

A couple of decades ago, there was a rising against this approach. Authentic assessment was about saying, "Instead of generating paperwork proxies that may or may not tell us the truth about our students, let's try other things. Instead of creating proxies for learning, let's try to create situations in which we can observe the actual learning." But authentic assessment is expensive and imprecise and doesn't make for nice standardized reports, and before we could finish struggling with ideas like gigantic portfolios that followed students around for years like tangled chains of Jacob Marley, the standards movement erupted with a call for top-to-bottom standardized one-size-fits-all paperwork coast to coast. But you'll notice that today some of the ideas of authentic assessment live on in places like Silicon Valley's miracle AltSchool.

But in Schools for Regular People, paperwork still rules. Policy leaders and bureaucrats still believe that the path to improvement is to get people to fill out some educational TPS report. If you want to explain the growth in school district personnel over the past several decades, go look at how many people have been hired just to fill out government reports. And yet every new education reform ultimate ends up boiling down to "Education will get better is we have schools fill out this new report."

And paperwork also got a new lease on life thanks to computers. We all know that meaningless forms and paperwork are a dead and moribund thing, but if we digitize them and turn them into spreadsheets that we can view on a screen-- well, that's just awesome!! The belief that paperwork and forms and reports can tell you everything you need to know about what's going on has become the new theory of Management by Screen, in which a manager (or principal) just sits in an office and watches the data scroll by, creating digitized picture of What's Happening Out There. Which quickly turns into, "I need you to get your data entered on the TPS program."

It's the end of the year, so like many teachers, I need to wrap up my reporting of my SLO, which will involve logging onto the software we're using to manage our SLOs and entering data which I absolutely swear will be completely authentic and accurate and not at all just made up in order to fulfill a job requirement to get these forms filled out by the end of the year. Also, none of my colleagues are just filling in the blanks to get the paperwork requirement done, either. And somewhere on the state level, some bureaucrat will look at all those forms and data (well, not actually look at them-- I'm pretty sure nobody ever actually looks at them, which is another hallmark of paperwork-- rather they'll look at the fact that they exist) and declare proudly, "Look at what a great job our teachers are doing. I know they're doing a great job because they've filled out all this paperwork."

Posted by Peter Greene at Saturday, June 03, 2017
Email ThisBlogThis!Share to TwitterShare to FacebookShare to Pinterest