We have tied to explain the problems of equality and equity and opportunity dozens of ways. Here are two you've probably seen, many times: 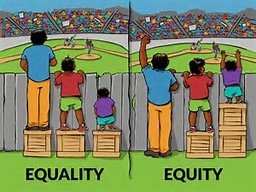 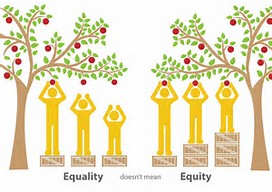 Let's imagine two racers approaching the starting line. Our two young divers are seated in similarly-built cars, made well enough for the race. The race down the hill begins at the starting line, but before they arrive at that line, anything goes.

Chris's car is carried to the starting line, and there Chris sits, waiting for the flag to be waved, at which point Chris will take off the break and let gravity move the car down the hill.

Meanwhile, Pat is lined up further in back of the starting line. Pat has family there, too, and when the flag waves, Pat's family will push Pat just as hard as they can. 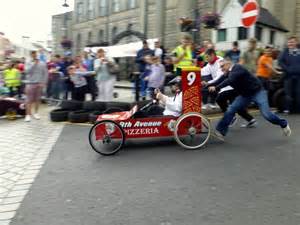 A few seconds later, we see the two cars on the hill. The race has begun. Pat is out in front, going far faster than Chris. But when someone among the spectators complains that the race is not fair, the reply they hear is this:

"It's perfectly fair. Look-- they're in equal cars, on the same hill, each one steering and driving their car depending on nothing but their own skills, reflexes, talents and abilities. If Pat wins, that must be because Pat is a better driver, and Chris would be better off building a skill set and becoming a better driver than worrying about. Because right now, on that hill, they are perfectly equal."

We could make the metaphor more complicated, give Pat and Chris different vehicles to represent various obstacles Chris brings into the race. But here's the thing-- even if Chris has just as good a car, is just as strong and sharp, works just as hard at driving, history is still on Pat's side. Everything that happened before the starting line was crossed makes a huge difference.

Research tells us over and over again that families of origin make a huge difference, that history stacks the deck before a child even crosses the starting line. We also know that how our society functions makes a difference as well (I might expand the metaphor by adding that Chris is stopped by police every ten feet down the hill).

I'm not arguing for inescapable destiny. I'm not saying that children who are born poor or raised poor are doomed, their fate set in stone, nothing we can do about it. There's plenty we can do about it. There are soooo many things that we can do in school to help boost up those racers who didn't get the extra push to start, and we should be doing every single one we can think of, because success is attainable for every child who walks through the school door.